Guanyu Zhou claimed his second victory of the Formula 2 season with an impressive lights-to-flag drive in race one at Monaco.

The UNI-Virtuosi driver made the most of his reversed-grid pole position, producing a controlled drive to victory despite seeing his comfortable lead wiped out by a late safety car.

However, the Chinese driver made a perfect restart and held his nerve over the final three laps to take the win from team-mate Felipe Drugovich.

Williams Formula 1 test driver Roy Nissany claimed his maiden F2 podium by inheriting third after Christian Lundgaard retired from second due to a mechanical issue earlier in the contest.

Championship leader Zhou made a perfect getaway from pole to lead the field into St Devote as fellow Alpine Academy member Lundgaard leapt from third to second with a move on Drugovich.

While the 22 cars navigated St Devote without issue, there was drama at Massenet when title contender Robert Shwartzman clouted the outside wall, breaking his front wing in the process. The damage resulted in the Russian retiring from the race.

Further back, the star of yesterday’s qualifying session Theo Pourchaire managed to gain two spots to climb from 10th to eighth ahead of Oscar Piastri and Liam Lawson.

The top three soon began to break away from the field as Zhou opened up a second gap over Lundgaard with Drugovich in hot pursuit.

Zhou soon got his head down opening up the gap to Lundgaard as the top 10 remained unchanged a third of the way into the race.

As the race approached the halfway mark Lundgaard began to drop back from Zhou as smoke started to emerge from the rear of his ART-run car. This allowed Zhou to move further into a comfortable five second lead.

The issue proved terminal for Lundgaard as he retired from second spot on lap 14 handing second to Drugovich and third to DAMS’s Nissany. It also put Jehan Daruvala into the critical 10th spot that would secure pole position for race two. 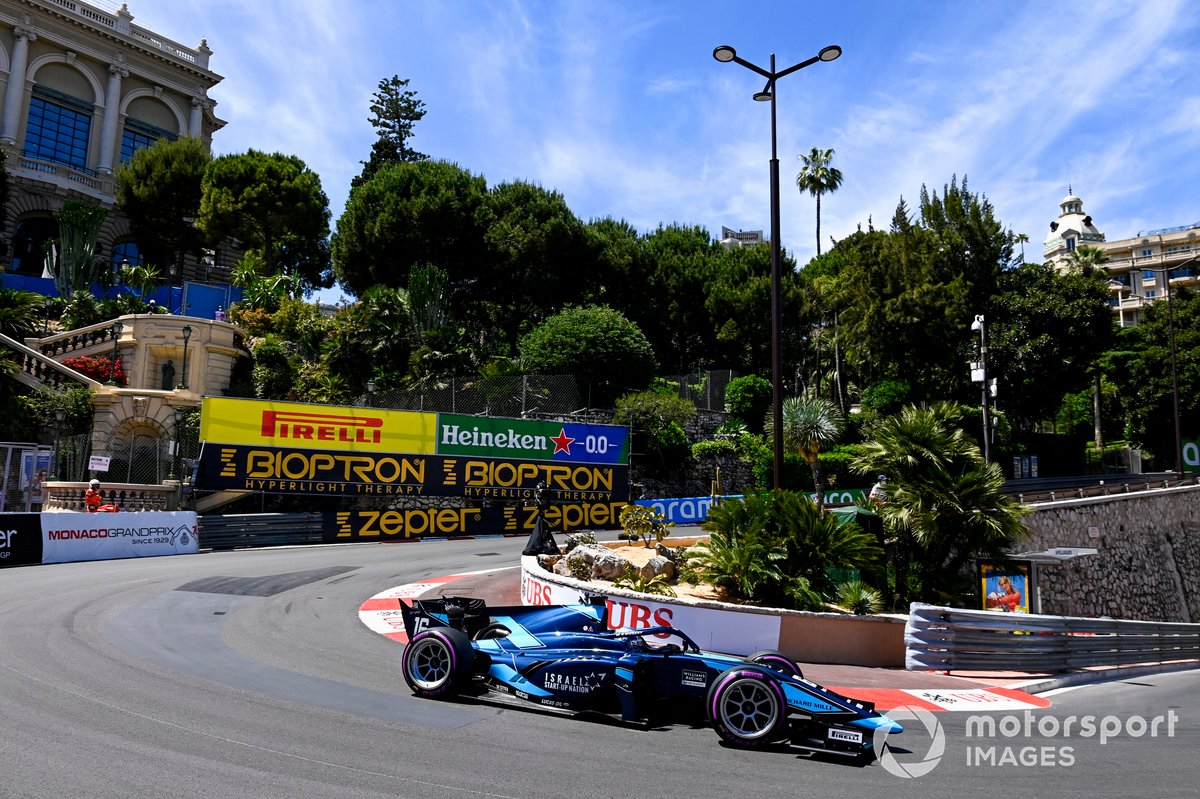 Zhou’s eight second lead was soon evaporated after official deployed the Safety Car with five laps remaining to recover Gianluca Petecof’s Campos after he found the wall at the swimming pool.

Despite the interruption, Zhou never looked troubled as he went on to take the win from Drugovich and Nissany.

Campos Racing’s Ralph Boschung recorded his best F2 finish in fourth ahead of Hitech Grand Prix’s Juri Vips and Carlin’s Dan Ticktum, although Vips is under investigation for an alleged safety car infringement.

Pourchaire came home in seventh fending off Piastri and Lawson as Marcus Armstrong managed to muscle his way past Daruvala in the final two corners to score the important 10th position.

Meanwhile, on his return to F2 Jack Aitken finished 16th despite admitting he was struggling physically in the HWA. His team-mate Alessio Deledda, who was permitted to race despite breaching the 107% rule in qualifying, finished a lap down.

Marino Sato completed the list of retirements after he crashed at St Devote on the penultimate lap.

After snatching 10th spot, Armstrong will start from pole for race two on Saturday morning at 0720 BST.