Liam Lawson produced a stunning drive on a damp but drying track to claim a well-deserved victory in an entertaining Formula 2 race two at Monaco.

The Hitech Grand Prix driver was in league of his own in the slippery conditions as he surged into the lead on lap 5, courtesy of a stunning move on early leader Oscar Piastri.

Once ahead, Lawson seemed comfortable although the New Zealander did face a challenge from Dan Ticktum who scythed into his lead as the track dried.

A late safety car threatened to derail Lawson but the F2 rookie held his nerve to take his second win of the season from Ticktum, with Piastri in third after fending off a charging Juri Vips.

There was drama even before the race had started as reverse grid pole-sitter Marcus Armstrong broke down at Rascasse on the way to the grid. The New Zealander was pushed back to the pits and was forced to start from the pitlane, leaving the pole position slot empty.

As the lights went out, Piastri made the most of the clear track ahead of him to get the jump on Lawson to lead the field as they tiptoed around a wet and slippery St Devote.

While the majority of the grid navigated the right hander without drama, Gianluca Petecof was forced into the barriers and out of the race after contact from Trident’s Marino Sato.

The race went from bad to worse for Armstrong as he retired from the contest after stopping at the St Devote exit road on the second lap, prompting a virtual safety car.

Once racing resumed, Lawson continued his assault on the rear wing of Piastri as he attempted to find a way through to the lead in the challenging conditions.

Lawson’s pressure on the leader prevailed on lap 5 when the Kiwi, who was clearly faster in the damp conditions, eventually grabbed the lead. He first attempted a pass down the inside of Piastri at the Nouvelle chicane, forcing his rival to cut the corner. However, Lawson regathered his car and produced an excellent move to take the lead moments later at Rascasse.

Once ahead, Lawson stormed into a three second lead while Piastri dropped into the clutches of Ticktum. 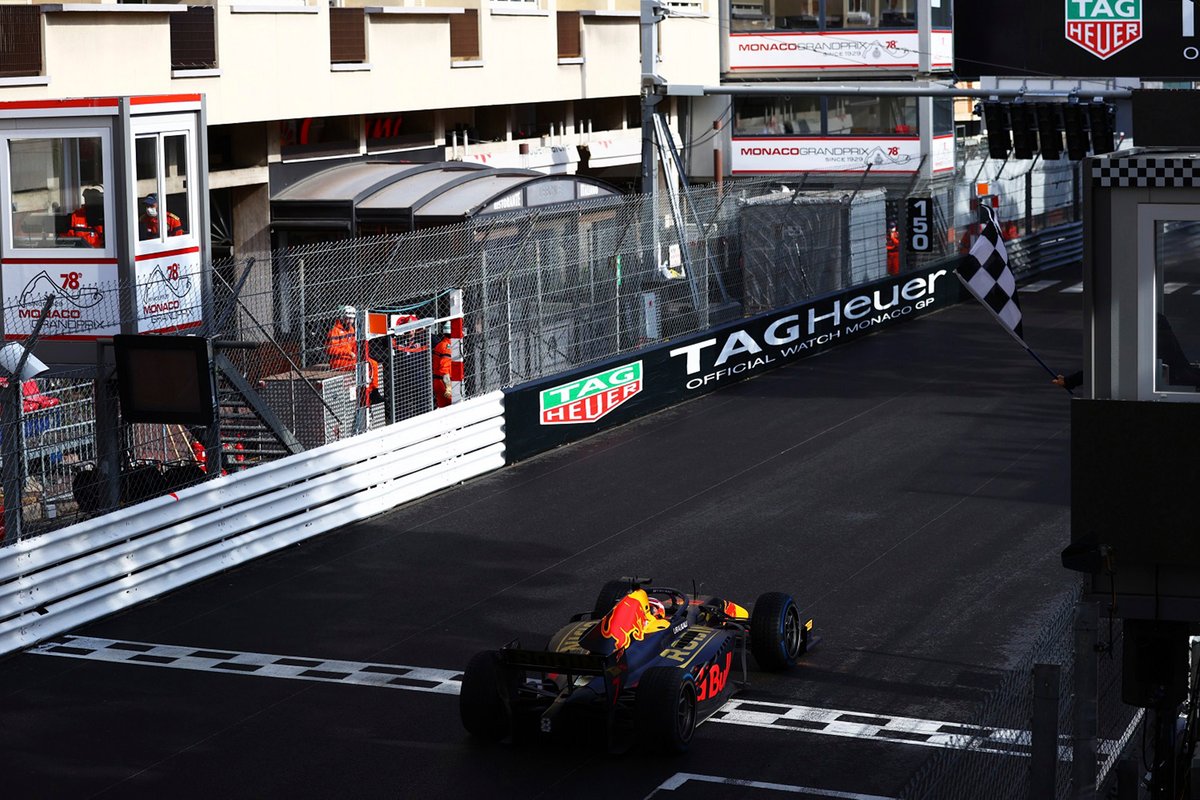 As the race reached a third complete a dry line began to appear in some areas of the track but Lawson maintained his comfortable lead over Piastri.

The virtual safety car was deployed once again on lap 11 to recover the stricken Sato who ran wide and stopped down the escape road at St Devote.

Under the neutralisation, UNI Virtuosi elected to take a gamble bringing both its drivers, yesterday’s race winner Guanyu Zhou and Drugovich into the pits for super soft slick tyres. Zhou was ninth when he stopped while team-mate in 12th position.

The gamble failed as the pair dropped a lap down on the field resulting in the duo diving into the pits to switch back to wets.

Back at the front Ticktum found a way through to second after pulling off a textbook overtake on Piastri into the Nouvelle chicane. The Briton soon began to scythe into Lawson’s lead halving the Kiwi’s advantage in the space of two laps.

Ticktum’s charge was soon halted as Lawson responded to restore his comfortable gap.

The safety car was called with six laps remaining after Bent Viscaal hit the rear of David Beckmann, leaving the latter stricken at St Devote.

Despite the interruption, Lawson went on to take the win from Ticktum, Piastri and Vips.

Theo Pourchaire came home in fifth ahead of Ralph Boschung, who held off Richard Verschoor, Lirim Zendeli, Jehan Daruvala and Jack Aitken, who rounded out the top 10.

Championship leader Zhou finished 16th after his failed tyre gamble, while Robert Shwartzman climbed from the back of the grid to 11th position after a late switch to super softs.

Pourchaire will start from pole when the field returns for the 42-lap feature race at 1615 BST.