De Vries committed to pitting under a safety car - caused by a crash at Anthony Noghes when Lando Norris nerfed Ralph Boschung - on lap 13 of the 42-lap race and took a shallow line, while DAMS driver Albon stayed wide.

De Vries believed Albon was staying out, only for the Anglo-Thai driver to enter with a wide line - cutting across the front left of de Vries' car and sending him into a spin, which caused damage to de Vries' car that would ultimately lead to his retirement.

Albon was adjudged to have been at fault and will now start Saturday's sprint race from last.

"As we got to Rascasse, Alex stayed quite wide, so I was thinking he wasn't going to box," said de Vries, who is now sixth in the points.

"I did a tighter line and went for pit entry, and he decided to come in anyway, and that's my part of the story and the stewards decided to give him a five-place penalty for tomorrow [Saturday's second race].

"I guess that was clear enough."

Albon blamed the absence of a pit entry line marking for the coming together.

"There was confusion really," he said. "In Monaco there's no pit entry line.

"Two drivers, Nyck and I, we've obviously been caught out.

"I did my line, the one I normally do. Nyck did his line, he thought I'd reacted to his pit entry but it was more just the entry is tight and I did my line.

"He'd already committed. I don't want to blame anyone, I just want to forget about it."

It was a race in which points leader Norris and third-place man George Russell both had problems, with the incident denying Albon a key opportunity to close the gap. 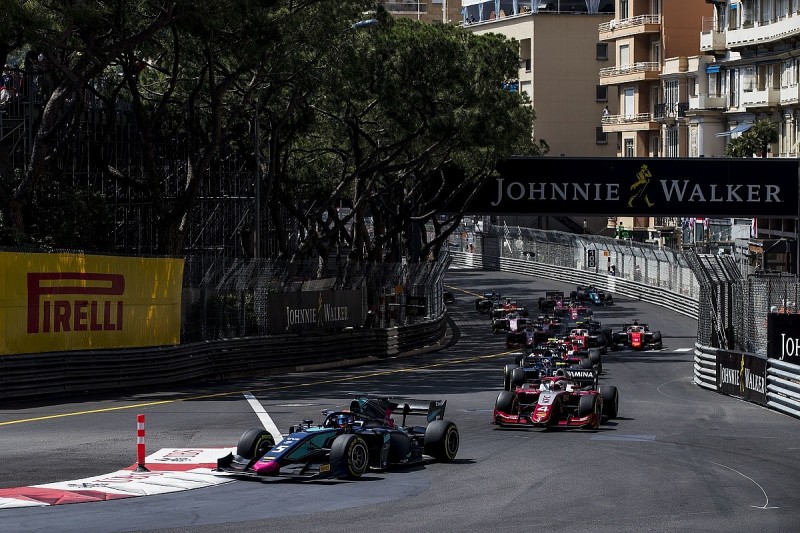 "It was a shame," added Albon. "It was a race where we really wanted to capitalise, Lando and George made mistakes [in qualifying] and it was looking really good.

"In the end we've come back pointless, it's a tough one to take in.

"We still have race two, [but] overtaking is not going to be easy."

Norris recovered to sixth in the race after a drivethrough penalty for the Boschung incident, and extends his points lead over Albon to 17.

With victory, Artem Markelov jumped into third in the standings ahead of Russell, who crashed out early on at Rascasse trying to pass Nirei Fukuzumi.

His weekend had been comprised by an engine problem in practice, hurting his running at a track that he has never previously competed on.

Russell qualified 16th but could not find the clutch quickly enough while passing Fukuzumi which, with the engine idle, the Mercedes junior said pushed his car into the barrier.