The Italian received a five-second penalty during the sprint race at the Hungaroring last weekend for speeding in the pitlane.

Fuoco was later called in for a stop, but did not take the five-second penalty in the pits as per the regulations as he and the team believed that the penalty would be added post-race.

"It's not nice," said Fuoco. "I don't want to say anything bad about the stewards.

"You can see also what they have done today [the three place grid penalty], I think it's a joke."

Fuoco had been involved in an incident in the feature race the previous day.

The Italian's race pace has been strong this year - in contrast to Charouz's qualifying struggles - and he again drove through the field on Saturday, initially advancing from 12th to second.

But having just taken second from Sergio Sette Camara, Fuoco was then hit by the Carlin driver at the penultimate corner and was pitched into a spin.

Sette Camara was given an instant penalty that dropped him to seventh, with Fuoco finishing third.

"I spoke with him [Sette Camara] and he said sorry," added Fuoco. "I was lucky as I took the clutch [to avoid a stall so he could keep going].

"It's a big joke because 10 seconds is nothing for him because then he finished P7 and he could finish on the podium [Sette Camara was third in Sunday's sprint race].

"I think the stewards need to understand a bit more." 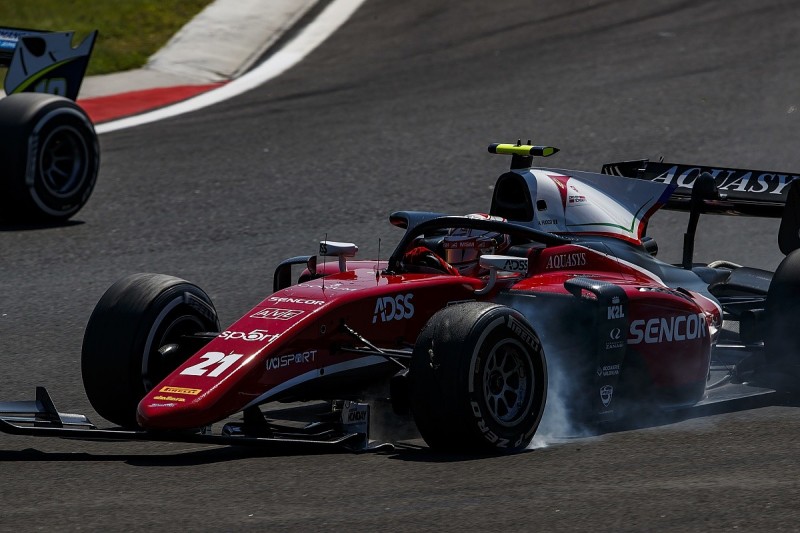 Fuoco's penalty for speeding in the pitlane came after he hit Sette Camara, who had backed off to remain under the virtual safety car delta time just as Fuoco sped up.

That left Fuoco nowhere to go given his closing speed, and a broken front wing forced him to pit.

"I think Sergio started to push and then went negative on the delta and he slowed down," added Fuoco.

"For me it was on the limit, but the stewards decided there was nothing further.

"But I think it was on the limit, maybe a bit too much on the limit. I destroyed my race and I think today [Sunday] I could have finished on the podium."