Honda protege Nirei Fukuzumi started on pole and, despite joining a host of drivers leaving the track at Turn 2, he held the lead before an "idiot" move from Alessio Lorandi - as described by Nicholas Latifi - took himself and Latifi off while they fought for a podium spot and brought out the safety car.

Lorandi locked up and ran off at Turn 2 and then repeated the feat at Turn 3, only to plough into the back of Latifi - who was left "pretty pissed off" in a race that was "ours to lose" according to the Canadian.

After the safety car, Russell pounced on Fukuzumi - whose car was sliding around - and moved into the lead.

All of the frontrunners pitted at the same time, and worked their way past Antonio Fuoco and Louis Deletraz - who both tried to stay out on soft tyres - quickly after the stops on lap 13 of 21.

Russell was just as supreme in the wet as he was in the dry, extending his lead to over seven seconds at the finish.

He had claimed the DAMS would be tough to beat before the race, but Albon could only manage third after failing to pass Sette Camara late on.

Russell extends his gap over Alex Albon in the championship to 37 points, with 48 left on the table in Abu Dhabi. 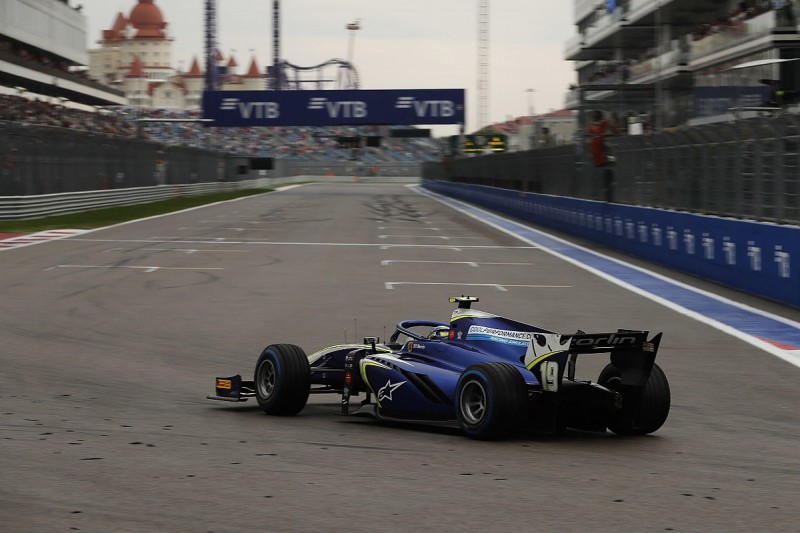 Norris retired from the feature race the day before when he was released from his pitstop without his front-right wheel attached and, with Russell winning, needed the two points for fastest lap to keep his title hopes alive - it was clear Norris would not reach the top 10, as he was given a stop/go penalty for lining up in the wrong place on the formation lap.

But Russell set the fastest lap on the fifth tour, and the rain a few laps later meant Norris had no chance.

De Vries passed Markelov for fourth on the penultimate lap after a to and fro battle in the second half of the race, while Roberto Merhi took sixth in his first event with Campos this year, having had a two-round hiatus after leaving MP Motorsport.