Gunther's victory was set up by an eighth-place finish in Saturday's feature race, and he led throughout from pole on Sunday for his Arden team's first win of the season.

The European Formula 3 graduate had to survive heavy pressure from Nyck de Vries and Artem Markelov early on, before Norris and Russell came to the fore.

He passed Luca Ghiotto, Antonio Fuoco, Louis Deletraz, Markelov and finally de Vries, all overtakes on the road, to set-up a final showdown.

With three laps to go the gap from Russell to Gunther was just over four seconds, but Russell whittled that down to 0.5 seconds at the flag after an incredible drive, similar to last week's sprint race in Austria where he also drove through the field to second.

It also extended his points advantage over Norris, who was equally impressive. 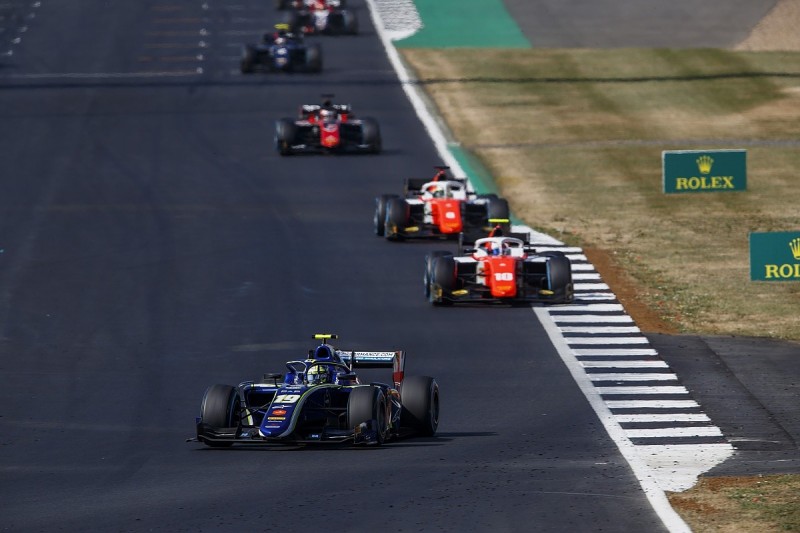 The McLaren F1 junior started 10th and took a little longer to work his way through the pack, but he followed Russell to the front and was right on his tail as he chased Gunther.

Norris's key moment came when he attacked Fuoco around the outside of Brooklands, giving him the inside line for Luffield on lap 15.

But Fuoco pushed him off the track and when Norris tried to re-enter, the two collided.

Fuoco was given a 10-second penalty somewhat bizarrely, given he had retired as a result of the incident and the penalty was ineffectual.

Markelov, Deletraz and Ghiotto all passed de Vries in the final laps.

Markelov lost out to Russell a lap after an intermittent throttle problem, which limited his power, occurred on lap 13 of 21, but he was able to consolidate the spot after a battle with the unimpressive de Vries.

Boschung had five consecutive turbo or engine related DNFs entering the weekend but did at least recorded two finishes at Silverstone.

While Gunther gave Arden victory, his team-mate and Honda junior Nirei Fukuzumi did not make the start from last on the grid with radiator trouble. He had retired the previous day.