Markelov moved to the top of the times at the end of the first set of runs one-third of the way through the 30-minute session, while ART Grand Prix drivers Alexander Albon and Nobuharu Matsushita, and DAMS duo Oliver Rowland and Nicholas Latifi, opted to wait for the mid-session lull before setting a competitive time.

Ferrari F1 junior Leclerc - who wrapped up the drivers' title last time out at Jerez - could only get within 0.6 seconds of Markelov's early best as he struggled with oversteer in his Prema-run car.

When practice pacesetter Albon, Matsushita, Rowland and Latifi eventually came out to set their first laps, it was Albon who got closest to Markelov.

He took a second effort when he had the track all to himself and was still 0.2s behind.

Disaster then struck the 2016 GP3 runner-up - who took pole in the third-tier category at Yas Marina last year - as his car "just stopped" and he ground to a halt on the far side of the circuit. 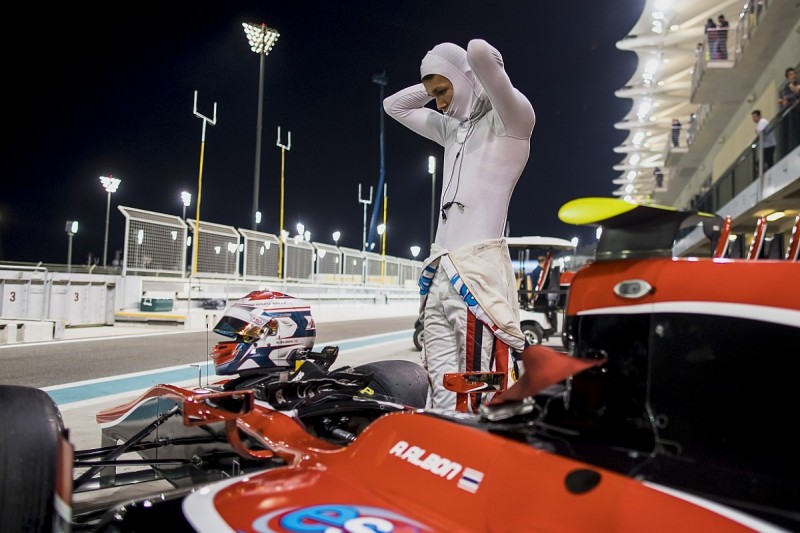 Albon's ART team told him to switch off the car and attempt to restart it, but he was left stranded and could not get back to the pits, eventually ending up with the 10th fastest time as the rest of the runners went for a second set of flying laps. He was later excluded from qualifying as ART could not provide the required fuel sample from his car.

Markelov led from the front and improved his best time to a 1m47.181s, which was not beaten, and he therefore claimed the first pole of his 84-race GP2/F2 career.

De Vries finished 0.206s adrift in second, a further 0.1s in front of Fuoco, with Rowland slotting into fourth ahead of Arden International driver Norman Nato.

Leclerc was able to improve on his final run but was again sliding on the super-soft rubber as he approached the end of the final sector, and ended up 0.511s slower than Markelov.

The result means Leclerc, who is hotly tipped to graduate to F1 in 2018 with the Sauber squad, remains on eight F2 poles - the same total achieved by Stoffel Vandoorne and Pierre Gasly during their time competing in GP2.

Nicolas Latifi complained of brake problems on his final effort and wound up 12th, just ahead of Rapax's Louis Deletraz and 2017 Formula 3 European champion Lando Norris, who is making his F2 debut in a one-off end-of-year appearance for the Campos Racing squad.