Sergio Sette Camara will remain at Dragon Racing for the 2020-21 Formula E season, with the identity of his team-mate yet to be revealed

Sette Camara lodged a best finish of 15th as neither he nor team-mate Nico Muller managed to score a point in the second leg of the coronavirus-disrupted season.

Dragon has now announced that the Brazilian driver will remain with the team, which will be rebranded as Dragon / Penske Autosport to highlight the involvement of the American giant in the outfit.

The announcement means Sette Camara is unlikely to see out the Super Formula season, which was due to be his primary championship in 2020 before coronavirus-induced travel restrictions played havoc with his plans.

The 22-year-old made a single race appearance at Sugo, qualifying his B-Max/Motopark car on pole position, but he crashed out late in the race on cold tyres.

With Formula E's Valencia test taking place days before Super Formula's next double header in Suzuka, it is expected that Sette Camara will not return to Japan for the final three races of the series. 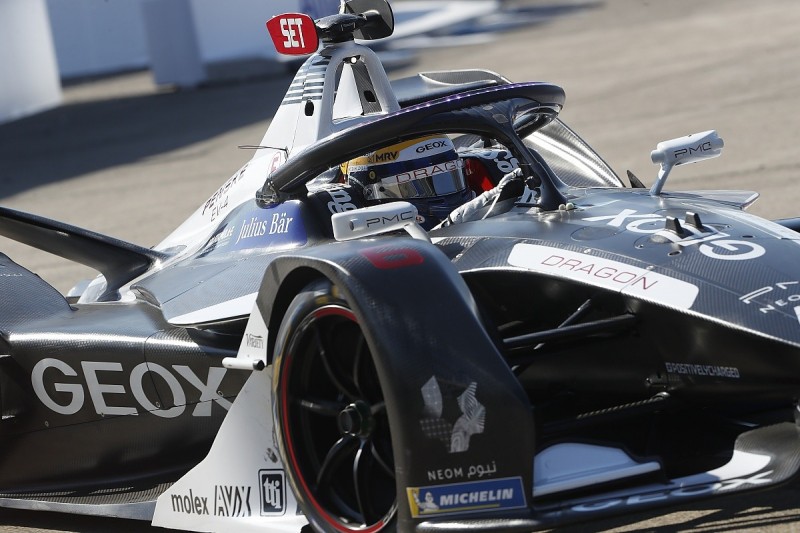 "I am excited to apply my learnings, and the work we have done in the off-season to my first full season with the team," said Sette Camara.

"My target is to bring the best result possible after each race, to have a steep learning curve in the series, and to enjoy my time with the Dragon / Penske Autosport crew!

"It is my goal to grow with the team and continue with the positive momentum we started together in Berlin, to consistently compete for points this season."

Dragon is yet to name its second signing for the 2020-21 season, which will begin in Chile in January, but Muller tested the outfit's Penske EV-5 recently and is believed to be in contention for the seat.

"Sergio gave everyone a preview of what is to come in his first six races with the Team in Berlin," Jay Penske, owner and team principal of Dragon / Penske Autosport said.

"I have been pleased with Sergio's pace and the rate at which he adapted to the rigours of electric racing.

"With the Penske EV-5 package and advancements we are making across the board, I expect him to convert the potential he showed in Berlin into consistent points finishes in his first full season with Dragon / Penske Autosport."

Dragon finished 11th out of 12 teams in the championship last season, with Hartley scoring two points with a ninth-place finish in the second Saudi Arabia race.