DS Techeetah's Jean-Eric Vergne pounced to the top of the Jakarta timing boards at the very end of practice, beating team-mate Antonio Felix da Costa with a late 1m07.594s.

Da Costa had only just cleared Jake Dennis from the top of the FP2 times, the 2019-20 champion logging a 1m07.993s to go quickest at the chequered flag, but Vergne put his car on top even later into the session to hammer home a clear Techeetah advantage.

As the mercury pushed 32 degrees C in time for FP2, the drivers had to intersperse their laps with tentative cooldown tours to ensure the tyres were not too punished by the escalating track temperatures.

This ensured that traffic proved to be a difficult factor to manage throughout the session, with a number of promising laps failing to yield consistent performance across all three sectors.

Lucas di Grassi was first into the 1m08s, logging a 1m08.750s to set an early marker - where he was followed into the same bracket by Nissan e.dams duo Sebastien Buemi and Maximilian Guenther.

The Brazilian driver was then dispatched from top spot by points leader Stoffel Vandoorne, who found a tenth and a half over the Venturi ace.

Sergio Sette Camara looked good to kick Vandoorne off the top, but a less successful final sector contrived to place the Dragon Penske driver in third, behind compatriot di Grassi.

Pascal Wehrlein then hustled his Porsche to the leading time, clocking a 1m08.410s to beat di Grassi's best lap from FP1 despite losing a smidgen of time in the final sector.

But it was then the turn of the NIO 333 pair to bask in the sun as Oliver Turvey shaded Wehrlein's time by 0.031s, but was immediately displaced by Dan Ticktum who scorched to a 1m08.338s.

As the session then ticked down into its final 10 minutes, Jake Dennis powered to the top of the timing boards with a 1m08.253s, but the Avalanche Andretti had to see off an assault from Edoardo Mortara and Mitch Evans.

Neither driver beat his time, and Dennis even had a chance to beat his own chart-topper - but ultimately trailed it by under half a tenth.

But just as it looked good for Dennis, the brace of DS Techeetahs catapulted their way to the top of the times to move the Brit down to third. 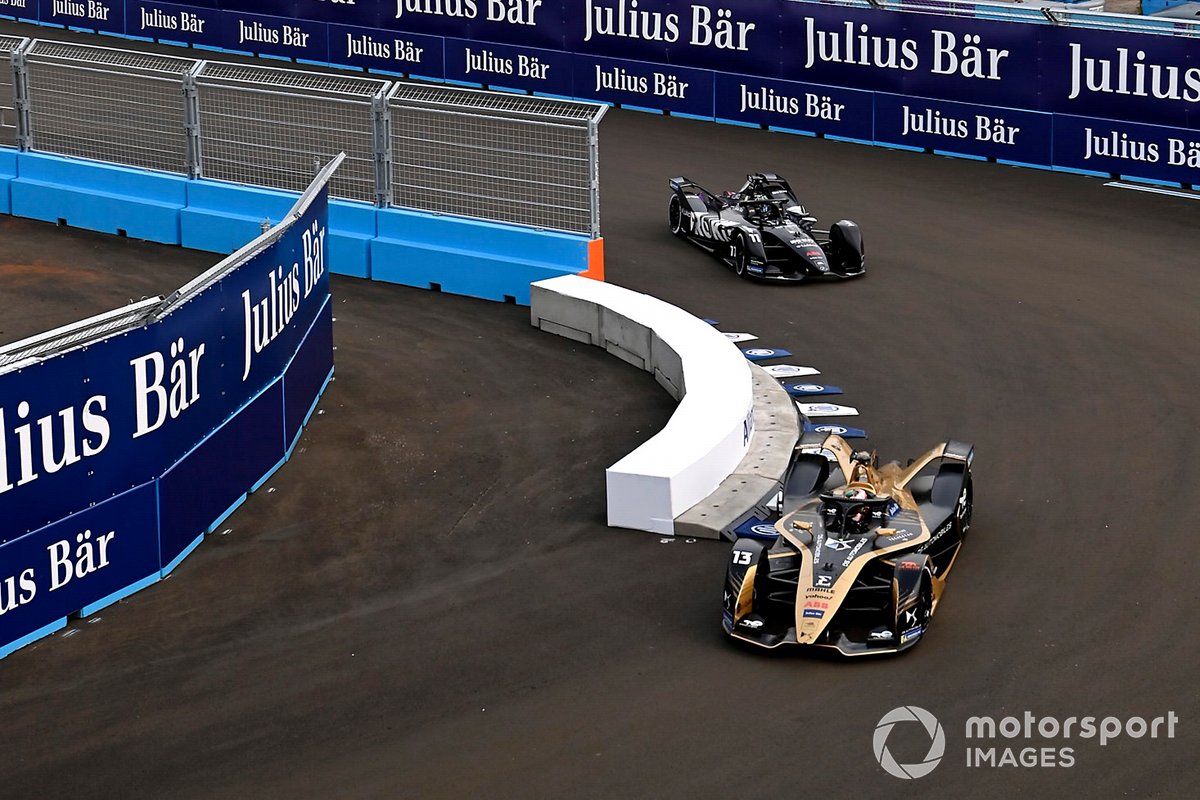 Evans and Mortara closed out FP2 in fourth and fifth, ahead of Ticktum and Turvey, while Wehrlein was eighth - a tenth clear of arguably ninth-place Antonio Giovinazzi's best lap in Formula E so far.

Turvey and Ticktum set the first representative laps of FP1, the latter managing a 1m13.561 off the bat as the new track surface was slowly dusted down.

The times quickly dropped into the 1m10s, Buemi pouncing ahead of Jake Dennis to grab a 1m10.283s - the Swiss driver having been the first driver to take to the track in Friday's shakedown.

Evans then brought the session into the 1m09s, before being quickly shuffled down a place by Dennis, before di Grassi threw his first proper effort into the mix and stood fastest with a 1m09.766s.

Jaguar's Evans then linked up with top spot once more, setting a 1m09.246s, as Pascal Wehrlein and Sam Bird then wedged themselves into the top three before the halfway point of the session.

Wehrlein carries a five-place grid penalty for Jakarta as a result of the FIA seals being broken on one of his two DCDC units.

Jean-Eric Vergne then punched in the first 250kW lap of the session to go fastest, posting a 1m08.703s, which went unchallenged for a good portion of the session despite challenges from Dennis and Andre Lotterer on full power - as Oliver Rowland came across traffic in Antonio Giovinazzi which meant he was unable to eclipse Vergne either.

But at the chequered flag, Rowland peeled past di Grassi with a 1m08.433s to head FP1, with former team-mate Buemi firing up to second at the death with a lap just 0.09s down on the Mahindra driver.