Mitch Evans's seventh-place start was the best qualifying performance by the British manufacturer in its debut Formula E season, and he ran well inside the top 10 in the opening stint.

Poor efficiency in the second stint dropped him out of the points-paying positions and a five-second time penalty for speeding under an early full-course yellow, caused by his team-mate Adam Carroll, meant Evans was eventually classified 13th.

It still marked a big improvement in performance from Jaguar, which was off the pace in Hong Kong and Marrakech and remains the only team yet to score a point in Formula E.

"We thought we had a great chance [of points] after the car swap," Jaguar team director James Barclay told Autosport.

"What did slightly surprise us is this is our hardest challenge to date, this was the first track everyone's been to.

"So if anything, doing it here, making that step here, was really impressive to see.

"There's a little bit of a positive surprise there, but it's really good to see what we thought we were going to see materialise - and on a track everyone's been to twice before."

Prior to Evans's qualifying effort, in which he set a time 0.75 seconds slower than Jean-Eric Vergne's benchmark, Jaguar's best qualifying result was 14th and it had been 1.3s off the pace at previous events. 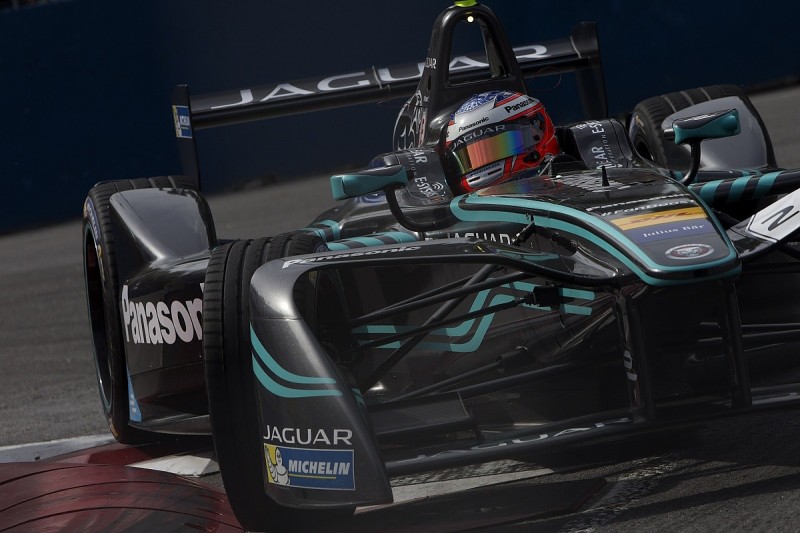 Evans said missing out on points should not detract from the team "making great strides" after "an absolute mess" in the first two races.

"I was hanging with the guys in front pretty comfortably and was pretty happy, and had a great pitstop," he added.

"The whole second stint was really tough, I couldn't match the energy targets as I could in the first stint and gradually got eaten up."

Though the New Zealander conceded that Jaguar still has "a long way to go on ultimate pace", he praised the improvements made on the car's set-up.

"It was the best I've felt in a Formula E car," he said of his qualifying lap. "I felt great as soon as I left the pits.

"You need that confidence in this car, especially one lap at 200kW and on the brakes, or you'll either be in the wall or just slow."

Carroll had a tougher event, struggling with the set-up throughout and then sparking the early caution when his car failed to launch, though he got going just in time to avoid falling a lap down.

Barclay was not sure if Carroll's problem was a driver or system error, but admitted the team needed to deal with full-course yellows better in the future as both drivers were penalised for speeding.