Formula E has publicly unveiled its heavily updated version of the ExCeL Centre track configuration that will be used for the London E-Prix double-header this weekend.

The championship first revealed the layout for the partially indoor circuit back in March 2019, but along with the FIA has now modified all three sectors and shortened the lap by 1.3 miles.

An opening Turn 1 and 2 chicane has now been tightened, with the updated route beginning to double back on itself rather than stick to the originally conceived 90-degree first left-hander.

Much more extensive modifications have been made to the second sector, with the direction for the hairpins of Turns 10 and 11 reversed from anti-clockwise to clockwise.

Drivers will now enter a 180-degree right hander and exit from a left to head directly into another tight chicane rather than the previous and slightly longer angled straight that fed into the complex.

The final sector has also been majorly reworked to dispense with a higher-speed sequences of sweeping turns where the track exits the exhibition hall to connect to a perimeter road.

The lap now instead feeds into an additional hairpin at Turn 16 before a further chicane had been added prior to the run to the penultimate corner.

These alterations to the third sector have been made amid concerns that speeds would be too high. 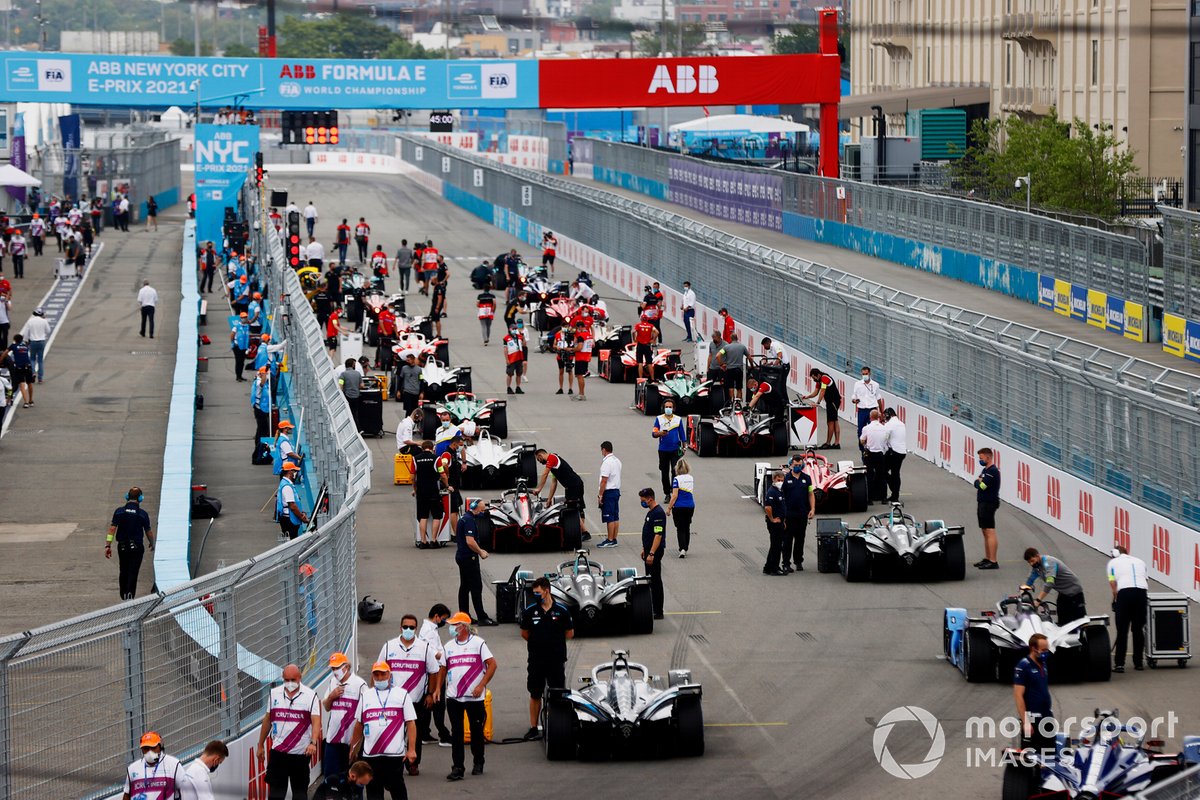 Mechanics begin to clear the grid for the start

However, the addition of heavier braking zones and slowing down the pace led initial team simulations to suggest that drivers would only need to recover 10 to 5% energy to reach the finish.

This compares to the usual 30 to 35% saving that must be made in a more typical Formula E race.

Teams and drivers voiced their concerns to Autosport that a flat-out sprint race could create a stalemate in strategies and a processional race.

Others thought that the absence of needing to lift-and-coast to bank energy in the build-up to an overtake would allow drivers to dive at will to initiate a spate of crashes and safety cars.

The FIA have since responded to these concerns by deducting 4kWh from the race total each car may use, bringing down the limit from 52kWh to 48kWh to introduce a greater need to save energy.

An FIA statement supplied to Autosport read: “Following the preliminary analysis of the London circuit and the energy consumption it was noticed that the lift-off requirements would not be significant enough with a 52kWh capacity.

“As the management of the energy consumption is key to the ABB FIA Formula E World Championship, and to avoid flat-out races, it has been decided to reduce the total amount of available energy to 48kWh for the races of London.

The double-header this weekend, which will be broadcast live on Channel 4, marks the returns of London to the Formula E calendar after Battersea Park last featured for the 2015-16 season finale.