The Jaguar I-PACE eTrophy, which supports certain Formula E rounds, will be cancelled at the end of the 2019-20 season amid the economic fallout of the coronavirus pandemic

Jaguar made a return to international motorsport with its FE team in 2016, and the one-make series for the electric I-PACE SUV launched in 2018 originally for a three-year deal.

The inaugural season featured 10 races and three events took place in the current 2019-20 campaign prior to the calendar disruption caused by COVID-19.

The grid peaked in its first year with 12 cars, but that has dropped to 10 entries this season split across six teams in addition to the centrally run cars for guest drivers.

Jaguar FE team director James Barclay said: "The series has realised many of the targets we set out to achieve.

"However, during these unprecedented times of the coronavirus pandemic, we have reviewed our strategy and made the decision to withdraw the Jaguar I-PACE eTrophy series after two successful seasons.

"We remain fully committed to electric motorsport and our Jaguar Racing Formula E programme as an important part of our transition to electric mobility.

"I'm looking forward to the Formula E and eTrophy seasons resuming if and when it is safe for our team, partners and fans to do so."

A statement issued by Jaguar confirmed that the championship will end "following the final race of this season". 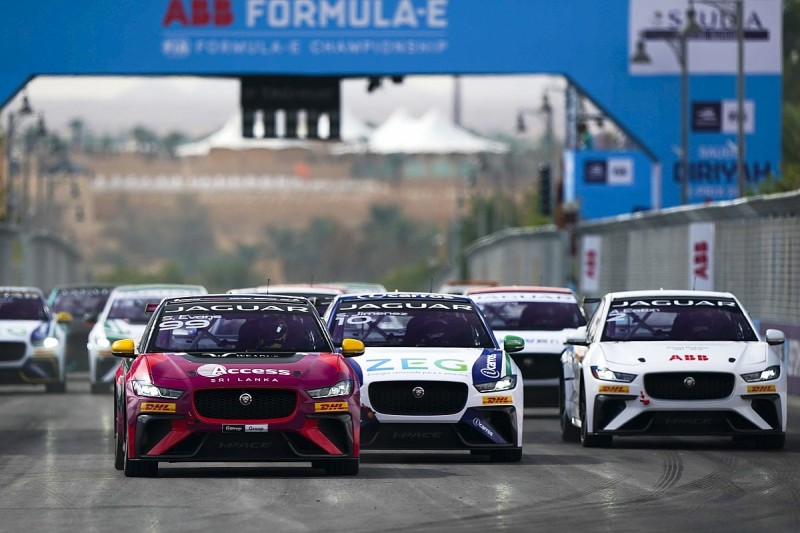 However, the FE season is currently suspended until the end of June and there are no more scheduled rounds following the recent cancellations of the New York and London events.

But Autosport understands the series is in talks with circuit organisers to resume the season by hosting races at permanent tracks.

Jamie Reigle, FE CEO, added: "Jaguar are fantastic partners on and off the track.

"The success of the eTrophy in taking the pioneering technology Jaguar developed through Formula E and applying it to high-performance production cars is a testament to their branding and engineering capabilities.

"At Formula E, we're delighted to have supported this project, which showcases how we enable our partners to leverage our platform to accelerate the adoption of electric vehicles.

"We look forward to continuing to work with Jaguar Racing on their Formula E programme."

Autosport understands that FE is interested in finding another category to support its events.

But it is not believed there is another championship or manufacturer currently lined up to replace Jaguar and the eTrophy.

The eTrophy is thought to be the first international motorsport series to be cancelled directly as a result of the current global health crisis.

Why one series' cancellation is a stark warning for others