Formula E needs to race on the Monaco Formula 1 track, according to Sebastien Buemi and Lucas di Grassi

The electric single-seater series raced on a revised version of the grand prix layout for the second time last Saturday.

FE's circuit turns sharp right at Sainte Devote onto a straight that connects to the traditional track via a hairpin at the chicane on the exit of the tunnel.

Monaco will not be part of the 2017/18 FE calendar because the series alternates with the biennial historic event, but leading drivers Buemi and di Grassi believe the full F1 circuit must be used if it returns in 2018/19.

"It's very important to use the Formula 1 track," Buemi told Autosport. "It definitely shows the development of the technology.

"I think it would be a great thing, for the championship, the technology and the drivers it would be much better.

"There's really an incentive to make sure if we come back it's on the big circuit."

Buemi admitted some people were "scared" of the prospect of the cars struggling on the rise from Ste Devote to Massenet in Formula E's inaugural season, but said it was wrong for people to think this would use more energy.

His championship rival di Grassi agreed, saying this belief was based on "a totally false premise".

"People get very confused when they talk about energy, they confuse the concept with power," said di Grassi.

"The motor is producing constant power for us. It doesn't matter if you're going up or down, it will produce 170kW [in race mode].

"The power use and energy consumption is constant. The only difference is the more uphill you go, the slower you go." 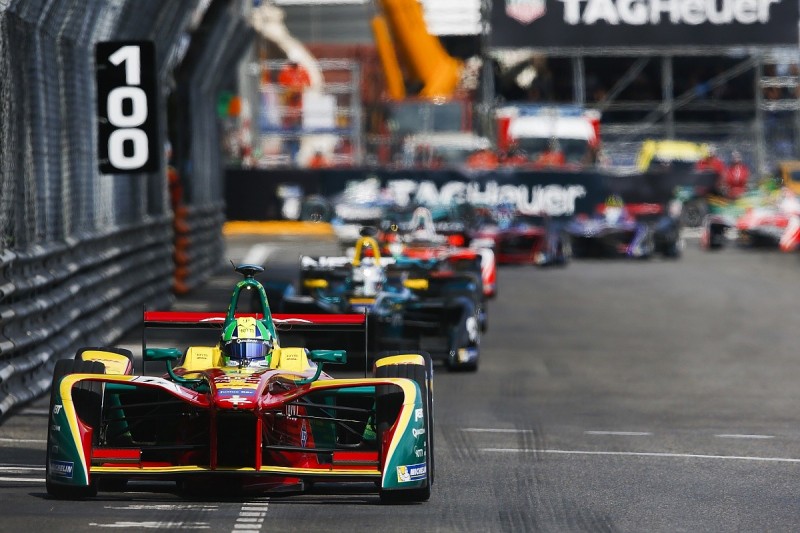 Buemi has won both Monaco FE races, which have featured very little overtaking.

Di Grassi thinks the full circuit would be better for FE and suit it better than F1.

"It's short and tight for F1 but for us the track is perfect," he said.

"It has a long straight where you have to coast and is wide enough for us to overtake.

If Formula E adopted the grand prix circuit it would be the first time it has raced on an identical track to F1.

While both categories race in Mexico City, Formula E uses a much shorter version of the Autodromo Hermanos Rodriguez circuit.

Buemi and di Grassi believe the first opportunity for a like-for-like comparison between F1 and FE would not be a problem.

"You cannot compare an electric racing car with a normal car," said Buemi. "We are just at the start.

"Formula 1 has been there for over 60 years. Who knows where the electric car will be in 60 years?"

Di Grassi added: "The first year was not best to compare it. Now, people know it's a complementary part of motorsport.

"It's like comparing WRC and F1, a completely different animal."