Mitch Evans says he is "gutted" to lose the Monaco E-Prix win on the final lap after 'paying the price' for overconsuming energy to gain track position.

Jaguar driver Evans pulled off two quick moves over Robin Frijns and Antonio Felix da Costa under his second attack mode to grab the lead of the race and had built a one-second gap over the rest of the field before a late safety car period erased his advantage.

When the race resumed with less than six minutes and one additional lap left to run, Evans found himself at a one percent energy disadvantage to his immediate rivals and had to defend hard to retain his position over the train of cars that formed behind him.

On the final lap, da Costa made a lunge on Evans around the outside of Nouvelle chicane and despite a lock-up managed to sweep around the energy-starved Jaguar to reclaim the top spot.

After losing the lead, Evans had to immediately turn his attention to the Envision Virgin of Frijns and, after running straight through the swimming chicane, he missed out on second position by just 0.024s on the run to the flag.

The Kiwi previously came close to scoring an outright victory on Monaco's grand prix layout in 2014, when Jolyon Palmer beat him to in the GP2 feature race at the Principality by 0.427s.

Asked what his overriding feeling was after dropping from first to third with less than one lap remaining in the race, Evans said: "I'm pretty gutted.

"But look, right now it hurts but when you look back I got myself into that position because I burned energy under attack [mode].

"I knew that was my only chance to get by them and I had two minutes left. I got Robin into [Turn] one and obviously Antonio into [Turn] three and that really bit me hard later in the race.

"But I had track position so I thought 'okay let's try and ride it out to the end' but Antonio was too strong and was also good at sort of dummying me and I had to consume more to try and keep him behind. So, I was really on the backfoot.

"But I knew he was going to come, I was just trying to delay for as long as possible but unfortunately we couldn't make it work. 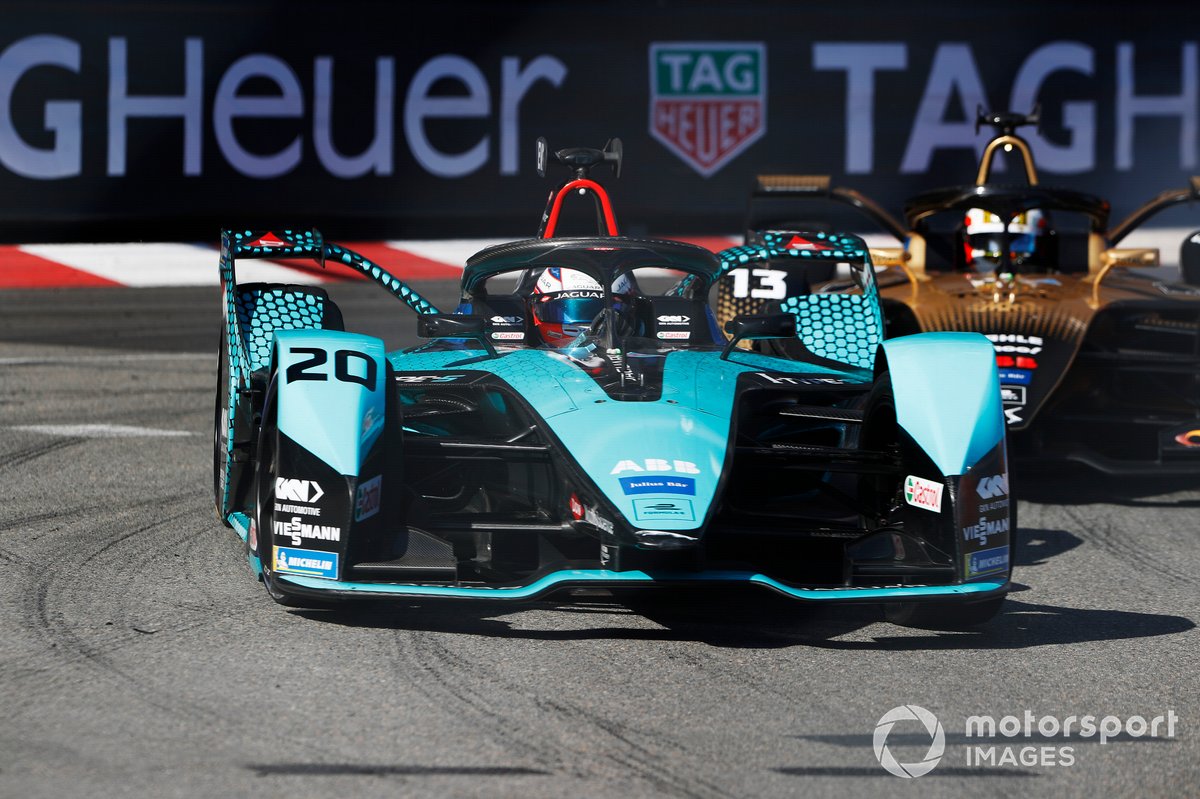 "I think third is probably where I should have finished but it hurts when you are leading with half a lap to go and you are third, it sucks.

"It hurts because Monaco is Monaco, everyone wants to win here. Third is great but you want to get that first win around here. I've got multiple podiums in other categories but not a win and we came half a lap short unfortunately today."

Evans arguably claimed the honour for the overtake of the race when he successfully passed da Costa for the lead at the narrow and fast Beau Rivage corner, a rather unusual place to overtake around the Monte Carlo circuit.

Having got a great exit from the final corner to pass Frijns into Turn 1, Evans made full use of the 225kw power mode to close right behind da Costa, before pulling out of his slipstream and carefully carving his way between the DS Techeetah and the wall on the right-hand side of the track.

"I wasn't really expecting it but just the pace difference on attack in going up the hill was huge," Evans said.

"I wasn't really sure what Antonio was going to do, so I went with my guts and we raced hard but absolutely fair.

"Maybe other drivers would have made it more dangerous than me to get by, but he gave me room on the outside and I just squeezed by.

"But I just went completely past my lift point to gain track position and it unfortunately hurt me."