Lucas di Grassi said Antonio Felix da Costa "didn't know how to race" in Formula E's Paris ePrix, but da Costa claimed he was just a "passenger" in their crash

Di Grassi attempted to pass da Costa for 13th around the outside of Turn 7 before half-distance and nosed ahead before the braking zone, then moved across to take the corner with right rear of his car level with the Andretti driver's front-left wheel.

They touched and when da Costa hit the inside wall it sent both cars into the Tecpro barrier on the outside, forcing da Costa to retire.

Di Grassi pit under the ensuing full-course yellow shortly afterwards, but picked up a drive-through penalty for being below the minimum pitstop time and later crashed out.

"I didn't see anything because when I went to the outside I passed him completely, braked and started turning to the apex," di Grassi told Autosport.

"He crashed into the inside wall and then into me.

"Antonio didn't know how to race today, he overtook me very harshly but I let him go - but when I was about to overtake him back he played extremely hard.

"That's the price of starting at the back, there's always these risks.

"That generated the crash and then this chaotic domino effect that really was a day to forget."

The stewards investigated both drivers after the race for causing a collision, but decided the incident warranted no further action.

Da Costa blamed di Grassi, telling Autosport it was "out of character" and that he "couldn't believe he would do something like that".

He added: "He's half a car in front but he can't turn into the corner that early.

"He's not a stupid guy, he's intelligent. He turned in so early I crashed into the wall before the corner was even there.

"I was a passenger, I had nowhere to go.

"He was being very clever - I overtook him and he was staying there.

"But one lap to another his mind just switched, he tried to overtake me like 20 times in five corners.

"He was all over me, and then he was just trying desperate moves everywhere." 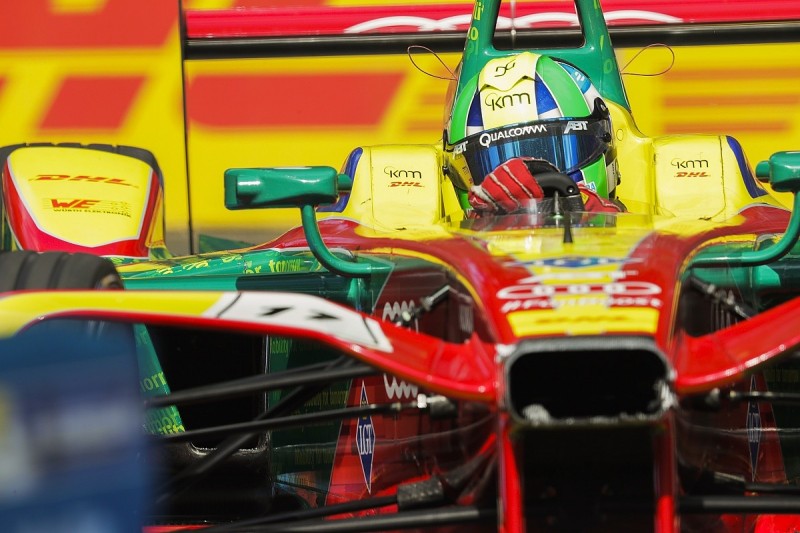 The result leaves di Grassi 43 points behind championship leader Sebastien Buemi, who took victory for the fifth time in six races this season.

Di Grassi, who only started 13th after a poor qualifying session, said it was an example of how "frustrating" Formula E can be.

"If you asked somebody how today went and they said di Grassi did the fastest lap of the day by a good couple of tenths, it doesn't seem like it," he said.

"Qualifying was horrible and then the race was a disaster.

"We went from fastest in FP2 to a poor qualifying lap, just had low grip everywhere, then the race went from bad to worse.

"We can definitely forget this race from my side and the team's side. We need to reset for Berlin."