We're getting towards the sharp end of this year's championship now with only four races to go, but already I'm excited about season six

Why? Because by then we will have an incredible array of manufacturers in Formula E.

We have just heard the announcement that HWA will race in season five, which will give us 11 teams. This is quite a clever move by Toto Wolff, Mercedes and HWA, because I think they will pretty much test the waters for the full Mercedes entry in season six. It's like a feeder team and in effect Mercedes are lending them their entry for a year.

It's smart because Mercedes will immediately get a bit of an advantage over Porsche, which is also coming for season six. But I am sure Porsche is doing its homework too. So, really, I can't wait for that first race in season six, when we have all those guys - Mercedes, Porsche, Audi, BMW, DS, Jaguar, Nissan, Mahindra, NIO... with 12 teams it's going to be incredible.

It's very significant for us that one of those teams is a Japanese manufacturer, as Nissan in effect will replace Renault for next season. Renault's contribution has been incredibly important for the championship - it believed in Formula E and worked with us from the very beginning. And it has been great to have Renault. We are now in a privileged position of having many European manufacturers, so adding a Japanese manufacturer will bring a huge element to the championship. We are really happy that Nissan is coming in.

Formula E doesn't currently have a race in Japan and that's something Nissan might be able to help us with. We're working on multiple locations including a Tokyo race, and Yokohama, as having a race in Japan is one of our top priorities. But it's very tough because the authorities in Japan are very strict and aren't used to city-centre racing, which is part of the DNA of Formula E. Hopefully with Nissan having its HQ in Yokohama the chances might increase. The roads are wide there, so maybe that's a possibility.

We don't have a major US manufacturer either at the moment and we are really trying to attract one. We would love to have at least one, but I think maybe the US culture isn't quite ready for electric racing. Still, we have good hopes that we will have one US manufacturer added in. A couple are 'sniffing' and we have an open dialogue, but they haven't yet taken the step. We are waiting!

But that's all for the future - there's still a fight for this year's championship of course and the top two drivers - Jean-Eric Vergne and Sam Bird seem quite clear now, unless Felix Rosenqvist makes a surprise comeback.

It's been great to see Sam and Felix in the title fight - guys who came up the motorsport ladder but didn't quite get to Formula 1. It shows that our championship has become a career destination for talented drivers.

Formula 1 may be the preferred destination but there are only so many seats, especially paying seats. So, Formula E is a good option for these drivers - they feel accomplished and happy and they enjoy the championship, so that's great.

They are our 'home-grown' stars, if you like. All we need now is to make Formula E bigger and then the stars will shine more brightly. But the stars are here already. 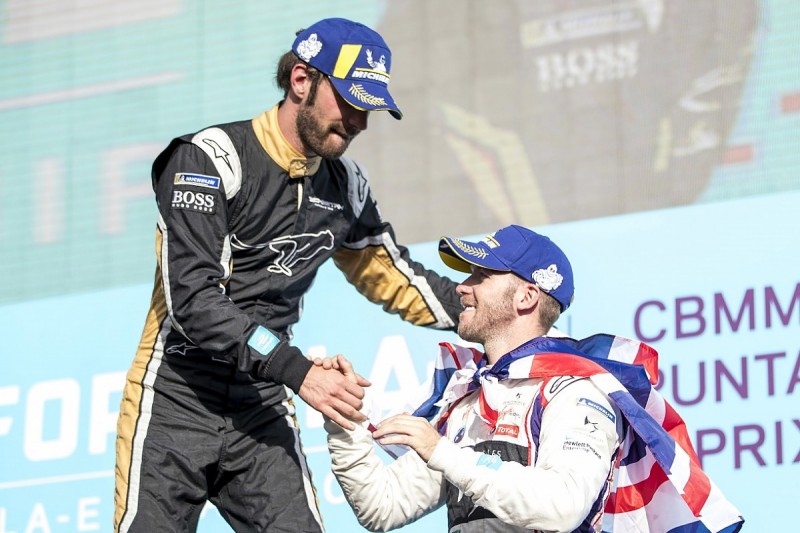 If either Jean-Eric or Sam do win, they would be the fourth different champion in four seasons. What does that say about the competitiveness of Formula E? It shows how uncertain the championship is and how open it is - and we have to keep it that way.

It's the big beauty of Formula E - anyone can win. I think other championships probably would like to have this situation!

We've had 11 podium finishers this season and of course that's part of it. Some of the teams at the back are struggling a little bit and have a harder time, but even those guys can qualify well, which could mean a podium - Edoardo Mortara and Venturi almost won in Hong Kong. Da Costa qualified second in Paris; so everyone can be on the podium. The races need to stay like this.

And of course, Techeetah, an independent team, might win the championship this year, which would be great.

Creating a system to protect independent teams is key to the championship, because the manufacturers may leave if they don't win. When we have nine or 10 and they decide to stop because they're not winning, you need a structure so that an independent team can come along, buy a powertrain from one of the remaining manufacturers and be competitive. And that's what we have in place, a healthy platform with clear technical regulations.

We're also making sure that we keep innovating with our race formats to ensure that it stays exciting.

Next season, we no longer have the mid-race car swaps, as we're moving to having the new battery in the Gen2 car, which will last a full race distance. All the teams are really happy with the battery - they say that McLaren and its partners have done a fantastic job.

I was initially worried about the battery. Not because I didn't trust McLaren or anyone, but because it was a big challenge. I'm very glad that we've been able to meet our targets.

To replace the action of the car change, we are working on an innovative race format, taking inspiration from Mario Kart. We will reveal more details in due course, but it will add to the racing spectacle and provide even more unpredictability to our races with slower sections of the track offering higher power modes to the drivers.

No gimmicks here! I think it's going to be great and it's something else I'm really excited about. I can't wait to see it in action. There are some technical things to iron out - but it's going to be electrifying.