A banner collected by several cars caused Antonio Felix da Costa to crash out of the Puebla E-Prix, with drivers now pushing for hoardings to be abandoned on safety grounds.

The Formula E champion suffered a sizeable shunt on lap 25 of 32 in Mexico when he ran well wide at Turn 7 and over the grass where he slammed the rear of his car into the wall.

Da Costa, second in the points entering the race, managed to crawl his terminally damaged DS Techeetah machine to the exit road at Turn 8 to avoid a late safety car intervention.

The Portuguese has now revealed the cause of the uncharacteristic mistake to be an advertising banner that was ripped from the wall when Andre Lotterer and Alexander Sims collided.

This banner was first caught by Sims, who was pinched against the wall by the Porsche driver, before it slid off and caught Lotterer and then eventually made its way to da Costa.

Da Costa reckoned he had been “hanging on for my life” after the banner caused his brake temperatures to spike, which led to his eventual retirement.

He told Autosport: “Honestly, I don't know what to say.

“I've been pretty lucky in some occasions of my life and especially the last couple of weekends, things coming our way.

“But what happened today, man...

“The Mahindra and Lotterer just crashed into that wall and ripped out like 40 metres of sponsorship banner.

“It went to three cars and it always came loose and then it landed on mine and stayed there. “It wouldn't go.

“Then my brake temperatures went over the roof.

“I had no balance in the car anymore. It was so hard to drive. 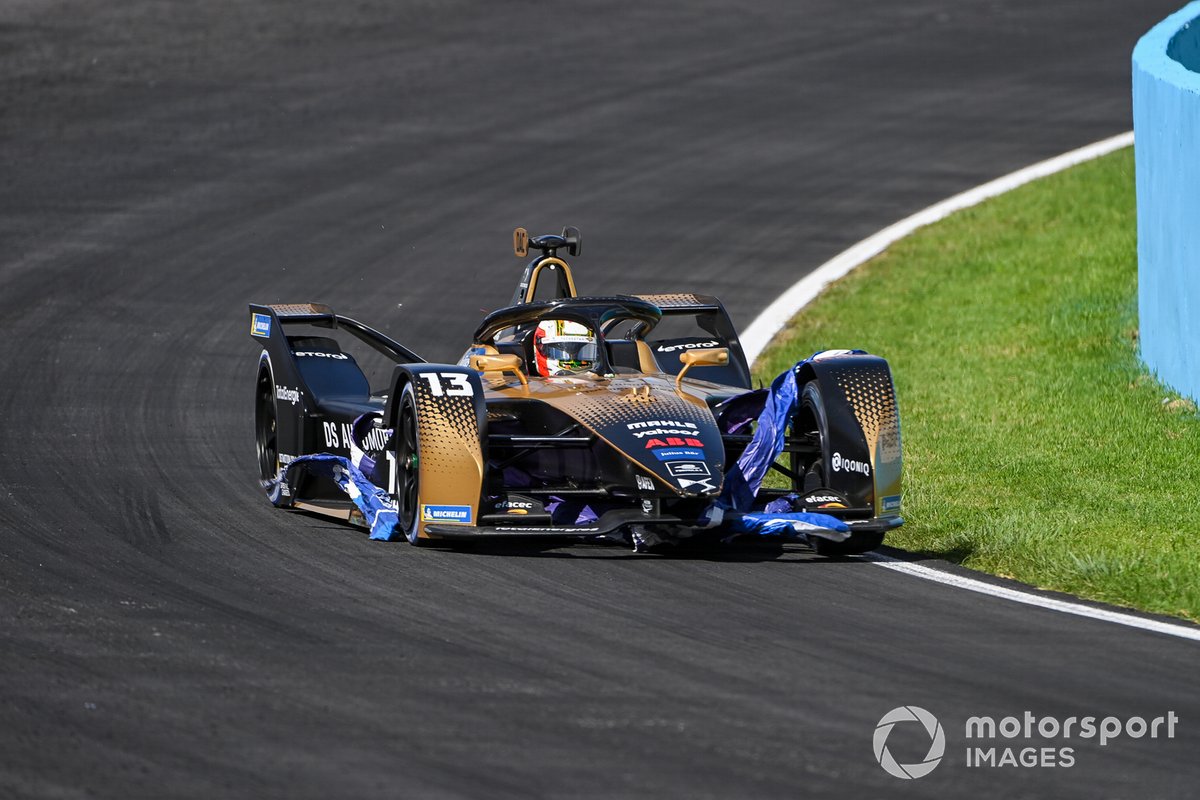 “I was hanging on for my life there.

“I cannot tell you everything but basically with a banner being there, my car was very confused.

“These are very smart and sophisticated software, and my car was not understanding at all what was going on.

“There's more to it than just me making a mistake.”

Expanding on the issue, Lotterer, who classified down in 17th, reckoned painted substitutes for the banners needed to be introduced to improve safety.

He told Autosport: “With Sims, we touched a bit.

“He passed me and he collected the banner and then that huge banner got under my car.

“I lost all the performance, and it was just a disaster.

“These banners are really annoying because there's too much plastic in the world, right?

“We should paint them, and it looks bad. It ruined a few peoples’ races.

“Also, in terms of safety, we should do something.

“There's room for improvement there definitely.”

Sims retired from the race after the plastic wrapped around his brake disc to cause a failure.