Victor Martins captured his first FIA Formula 3 victory at Zandvoort, with a convincing charge through the field putting him third in the drivers standings.

The 2020 Formula Renault Eurocup champion, who had been runner-up twice in his maiden season of F3, scored his debut win in a dramatic race as title rivals Dennis Hauger and Jack Doohan finished outside the points following incidents in the last two laps.

From fifth on the grid, having finished race one in eighth, MP Motorsport driver Martins worked his way to the lead by lap 16 of 24 by passing fellow Frenchman Clement Novalak, who finished second as Frederik Vesti completed the podium for ART Grand Prix.

Trident driver Novalak had taken the lead from pole starter Ido Cohen (Carlin) by Turn 1, leading the two-wide pack in a chaotic exit from the banking at Turn 3 before Johnathan Hoggard took a trip through the gravel.

The safety car was deployed on lap three when Lorenzo Colombo (Campos) suffered a left-rear puncture after contact with Hunter Yeany in Turn 1.

Racing resumed on lap six, and Martins soon took advantage of Cohen and Vesti’s battle for second to sweep up the inside of the Dane at Turn 3.

A DRS train had formed by lap nine, with Cohen at one point closing to within 0.7s of Novalak before falling back again.

By the halfway point, Vesti was right on the gearbox of Martins, while Novalak broke the one-second DRS window to Cohen and had built a 1.3s buffer. 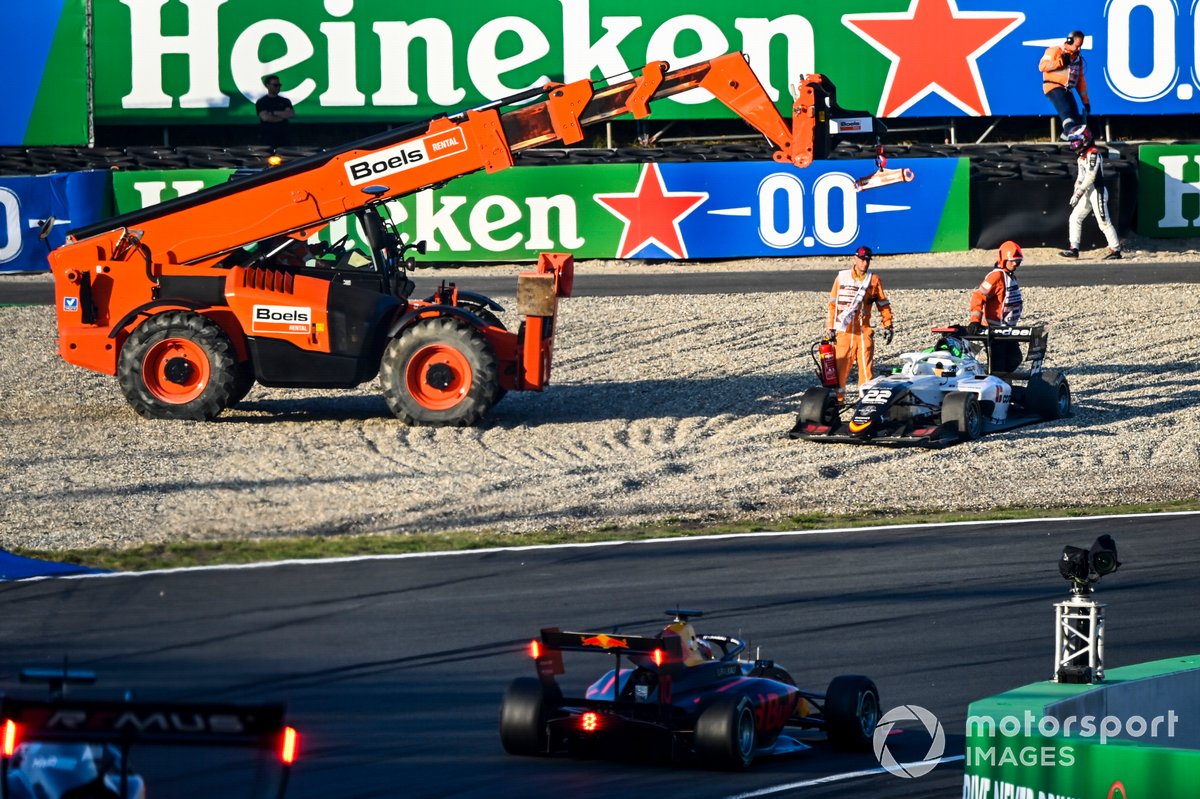 Martins eventually gained the momentum to pass Cohen with the help of DRS on the start-finish straight on lap 14, Vesti following him through one lap later in an almost carbon-copy of Martins’ earlier move.

Martins took just two laps to pass Novalak around the outside of Turn 1 and was never headed thereafter, surviving a safety car restart with two laps to go necessitated by Amaury Cordeel beaching his Campus car in the Turn 1 gravel.

Before the interruption, points leader Hauger had cleared team-mate Caldwell for fifth, and made short work of Cohen to grab fourth.

But on the restart, Cohen made contact with Hauger into the Turn 3 banking, causing Hauger to suffer a right-rear puncture and plunge down the order.

On a dramatic final lap, Schumacher passed Caldwell for fifth, before Doohan went off the road and dropped from ninth to 18th.