In the final five minutes, over 20 cars littered the straight leading to the Parabolica corner.

Some cars - including eventual polesitter Christian Lundgaard of ART Grand Prix - came onto the straight to finish the final sector of a flying lap, but were met with three- and four-wide trains of cars backed up while preparing to start their qualifying laps.

Many drivers on flying laps had to take avoiding action, and championship leader Robert Shwartzman called the situation "dangerous".

The FIA confirmed to Autosport that the red flag decision was made for safety reasons.

Shwartzman said: "I'm disappointed, but we have been lucky to have completed at least one lap."

"Then people didn't want to concede the slipstream, and there were plenty of dangerous situations with drivers braking or changing lanes.

"I didn't get a single sector where I gave the best that I could, because there was always a messy situation around." 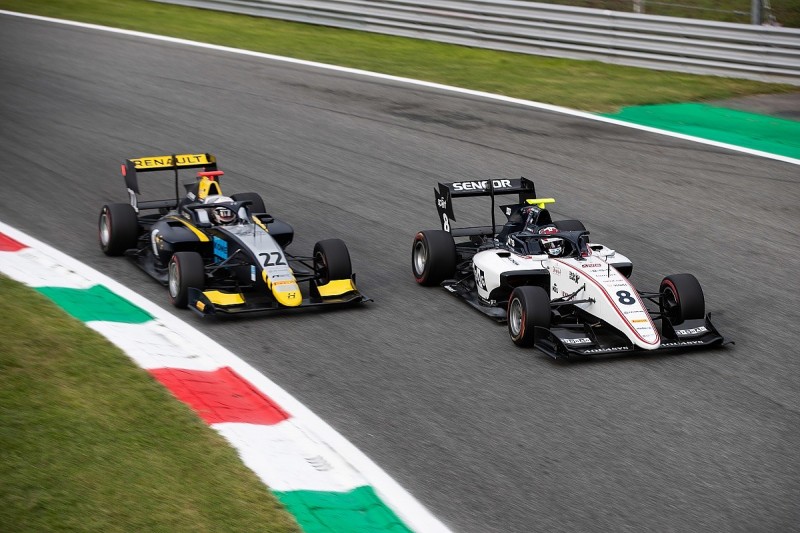 Because 30 cars are fighting for track position during qualifying, earlier in the season teams had discussed the possibility of asking for a variation of grouped qualifying to be implemented.

When asked if grouped qualifying would have solved the problem and if it should be looked at, Renault junior Lundgaard said: "Yes, that's my answer. I think this is a pretty good example, and in Macau as well.

"Juri [Vips] mentioned that in the briefing and they said they hadn't looked at it.

"When you have 30 cars it's going to be messy. I think two groups would definitely reduce the pressure."

Lundgaard's view was not shared by all drivers.

Ferrari junior Marcus Armstrong, who qualified second ahead of team-mate Shwartzman, added: "At normal circuits, I don't think so.

"Obviously the circuit changes a lot, so it's not fair to the guys in the first group.

"As a circumstance, I think that was difficult to manage, but I don't believe it would be the same if we did the exact same session again.

"If we had Q2, for example, I don't think it would end up like that. It was just a particular session in how it unfolded."