While the Italian had to endure a battle on the first lap with Pipo Derani, title rival Felix Rosenqvist fought through from 13th to sixth.

That means Marciello leads the Swede by 45.5 points, with 75 available going into next weekend's Hockenheim finale.

Derani swept past Marciello with a tyre-smoking manoeuvre into the first braking point, the Cimini curve, so the Ferrari protege had to rapidly reassert himself at the next corner.

Derani claimed that this was after the safety car boards appeared for an accident between Sean Gelael and Lucas Wolf, who went flying off the road at the kink on the way down to Cimini.

But Marciello said: "After I overtook him I saw the safety car board. I asked Rene [Rosin, Prema team manager] if I had to give the position back to Pipo, he went to the stewards and they said it was all OK."

A strong restart from Marciello then allowed him to open a cushion to Derani.

Although the Fortec Motorsport-run Brazilian kept the gap to the Prema Powerteam machine of Marciello within two seconds for a few laps, the leader began to really extend the advantage in the middle of the race.

An early fight for third place between Felix Serralles and Alex Lynn, after Lynn had passed Alexander Sims, resulted in light contact between the pair, allowing Sims to slip back ahead of both.

The delayed Serralles was then knocked into a spin at the next corner by Lucas Auer, who in fairness seemed to have nowhere to go, effectively ending both men's races.

Sven Muller took advantage to slip into fourth, but he dropped out a couple of laps later, promoting Lynn back into the position.

He was never a threat to the T-Sport Dallara-Nissan of Sims though, who was the only man to feature on all three podiums this weekend. 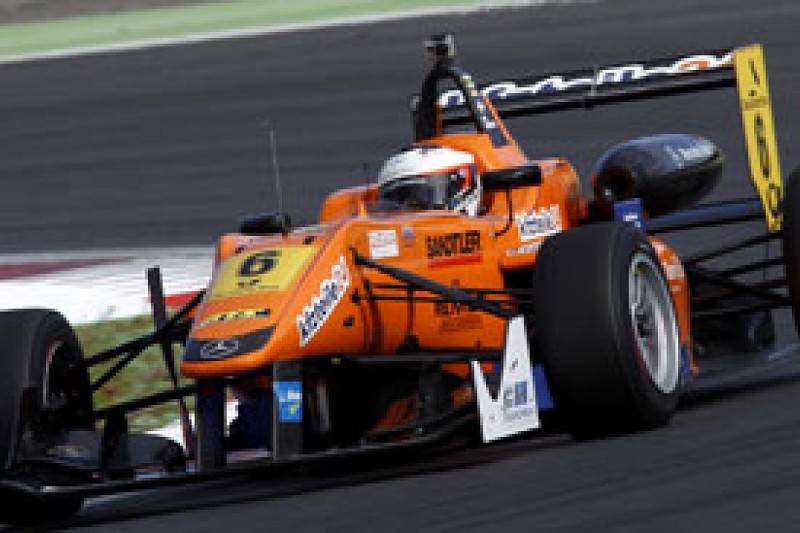 Rosenqvist moved smartly through all the drama ahead to grab sixth.

He challenged Jordan King briefly for fifth, and there was light contact between the pair before the Englishman held on.

Daniil Kvyat and Harry Tincknell made it three Carlin drivers in the top eight, with Dennis van de Laar and Michael Lewis rounding out the top 10.

With Kvyat unregistered for points, Jann Mardenborough scored the final point after winning his fight with Mitchell Gilbert.