Nirei Fukuzumi claimed the final podium place after a late pass on Ryan Tveter, while the 18-lap race ended dramatically when Dorian Boccolacci crashed into the back of Alessio Lorandi and rolled into the Turn 4 gravel trap on the final tour.

At the start, Hyman led away from pole position for Campos Racing as Lorandi made a poor getaway from second on the grid and fell to seventh.

Alesi therefore immediately moved into second place as the ART trio of Fukuzumi, Jack Aitken and race one winner George Russell also made gains at Turn 1.

Fukuzumi was the big winner as he swept around the outside of Anthoine Hubert and set off after Tveter for third place.

Hyman pulled out a solid but not spectacular margin over Alesi of just under one second, which kept the Trident driver within DRS range, as they both pulled clear of Tveter.

The lead hovered at around 1s for the remainder of the race as Hyman and Alesi exchanged fastest laps.

But although Alesi used his limited DRS opportunities to get closer to his rival at one stage late on, he did not mount a proper challenge for the lead and Hyman claimed his first win in only his fourth start in GP3 by 0.9s. 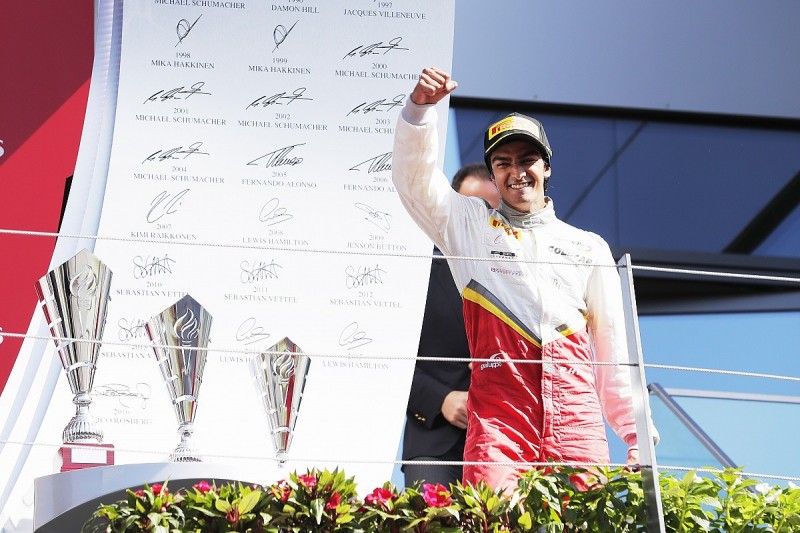 Behind the leading pair, Tveter resisted the attentions of Fukuzumi for much of the race - without the benefit of DRS to defend - but the Japanese driver used his overtaking aid to move close the American at the start of lap 17.

Tveter defended hard at Turn 1 and at the tight uphill Turn 3 but was ultimately powerless to stop Fukuzumi blasting using the DRS on the run to Turn 4 to seal his second third place of the weekend.

Aitken and Russell stayed close throughout the whole race - at times the former would get close to Fukuzumi and then fall back towards his fellow Briton - and they came home fifth and sixth.

Hubert moved up to seventh on the final lap when Boccolacci attacked Lorandi under braking for the downhill right of Turn 4 and was launched over the back of the Italian's car; rolling three times in the gravel as a result.

But the French driver, who was classified 17th, was able to walk away from the wreckage unhurt.

Although he was able to get going again, the Finnish driver finished a lap down in 18th place.

The only non-finisher was therefore Bruno Baptista, who ran wide at Turn 9 and launched his car airborne over the kerbs before pulling off.