Guan Yu Zhou and Mick Schumacher had left-rear punctures on straights while running third and fourth respectively, causing them to retire to the pits, while Ralf Aron was outside the top 10 when a blowout caused him to spin into the gravel at Stowe corner.

Marcus Armstrong, who was leading the championship before start of play at Silverstone, backed off to conserve his rubber and finished sixth, conceding the series lead to Dan Ticktum.

Changes to Prema's cars before the second race preceded a Schumacher victory, while Armstrong drove a conservative race to fifth.

Prema boss Rene Rosin told Autosport: "I think it was set-up related - a combination of that, the tyres, temperature and everything."

F3 cars became heavier in 2017 after safety updates to the Dallara chassis, but the effect was masked in last season's visit to Silverstone as it took place in April in cold conditions.

Furthermore, a resurfacing of Silverstone has led to high tyre degradation for the whole F3 pack in 2018.

"It's a high-degradation circuit," said Rosin, "and it has new Tarmac, the car's weight is quite important, and all the fast corners put a lot of load on the tyres." 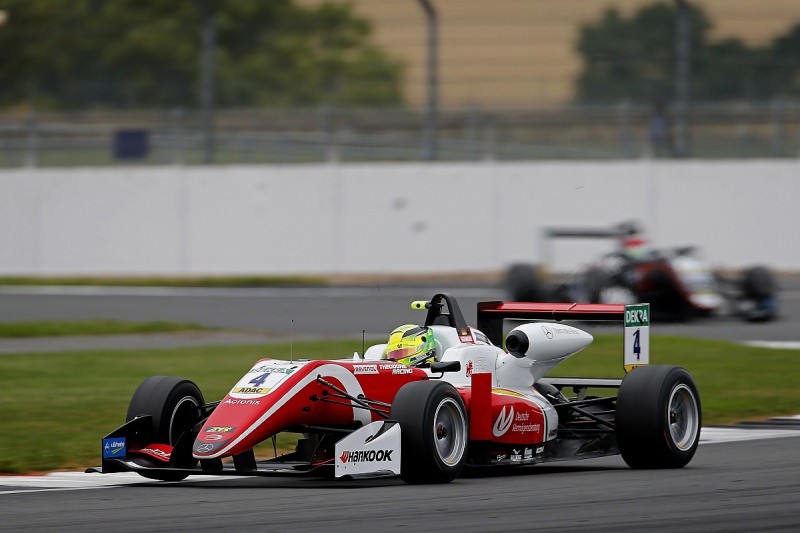 After his win in the second race, Schumacher said: "I would be lying if I said I wasn't worried [about the tyres].

"We weren't the only team that had issues so everybody made changes to make them last longer.

"I also adapted my driving style towards it and it worked pretty well."

Armstrong explained that he backed off in race one because "I could feel my tyre was about to explode, and I did the same in race two [in which he finished fifth] because I'd rather finish the race.

"I probably overreacted in race two because I wanted to make the chequered flag."

Jonathan Aberdein, one of three drivers from the Motopark team to take a podium finish in Saturday's two races, contradicted Schumacher's statement that every team had issues.

When asked if there were any concerns over tyres, the South African said: "No - the Motopark car is unbelievable this weekend.

"The guys have worked so hard, all night, all day - they're sacrificing so much."