Pirelli is to supply a tyre based on its BRDC British Formula 3 Championship rubber for next month's Macau Grand Prix, Autosport has learned

The Italian company has won the contract for the race, which doubles up as the FIA's new F3 World Cup, ending a 33-year run for Yokohama since Macau adopted F3 rules in 1983.

The British F3 tyre is the same as that used in the German and Italian Formula 4 championships, and Van Amersfoort Racing, Motopark, Carlin and Fortec Motorsport tried it on FIA-spec F3 machinery in a recent Monza test in a bid to simulate the high speeds of Macau.

VAR boss Frits van Amersfoort estimates that it is up to one second quicker than the relatively hard Hankook used in the F3 European Championship, and on pace is comparable with the Macau Yokohama.

"We got to know that it's going to be the FIA F4 tyre and of course we have quite some stock of that," said van Amersfoort, whose team ran this year's German F4 champion Joey Mawson.

"Monza is hard on tyres and we had some blistering - we know it's quite a delicate tyre but the biggest difference is the speed and feel of the tyre and the response it gives the driver, and they like it.

"We were not the only ones with some problems with the tyre and of course Monza is a lot harder than Macau [for tyre wear]." 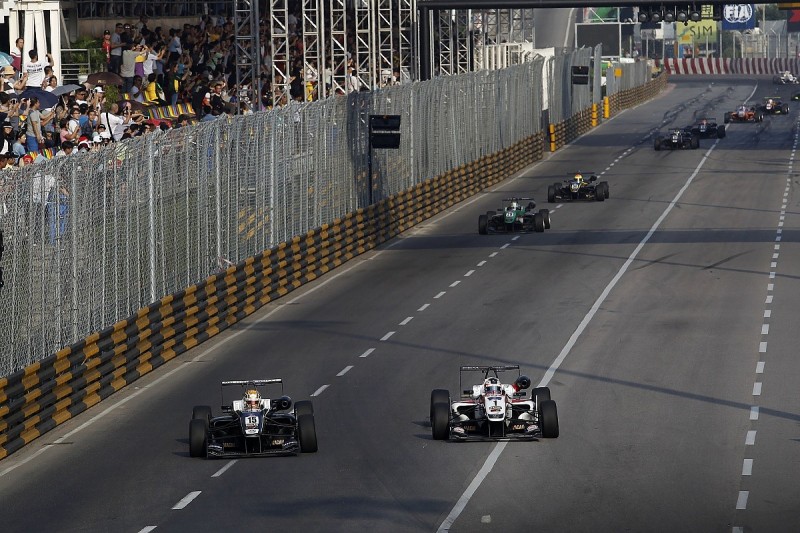 Fortec experienced a tyre blowout, but team principal Richard Dutton told Autosport: "I think we've found out why and we're not concerned about it any longer."

And Motopark chief Timo Rumpfkeil suggested that any problems with the Pirellis at Monza could have been caused by running a set-up targeted more to performance on the Italian track than in Macau.

"I have no worries about blistering," he said.

"For us there were zero problems - if you know what you're doing!

"It is quicker than the Hankook, but Monza is a shit place to judge speed - because of the tow the tyre has a lower effect on lap time than any other track."

Carlin's Lando Norris set the quickest time of the test on Pirellis, and is understood to have been 0.7 seconds slower in also setting the fastest lap on Hankooks.