Joel Eriksson dominated the Zandvoort Masters of Formula 3 qualifying race, running away from Callum Ilott to win by 1.4 seconds

The race was won off the grid, as polesitter Ilott was caught out by the quick change of lights, meaning that Motopark Dallara-Volkswagen driver Eriksson bolted up the inside from second on the run to Tarzan and secured the lead.

"It was a bit of a mess really," said Ilott.

"We were expecting an F1-style start with five red lights but it wasn't, it was just a quick lights on, lights off start. That threw me."

From then, Eriksson was never threatened, pulling away by over two seconds at one stage before easing off towards the end.

"I made a good start but I had to manage the tyres," said Eriksson. "The track is hard to manage so I was always thinking." 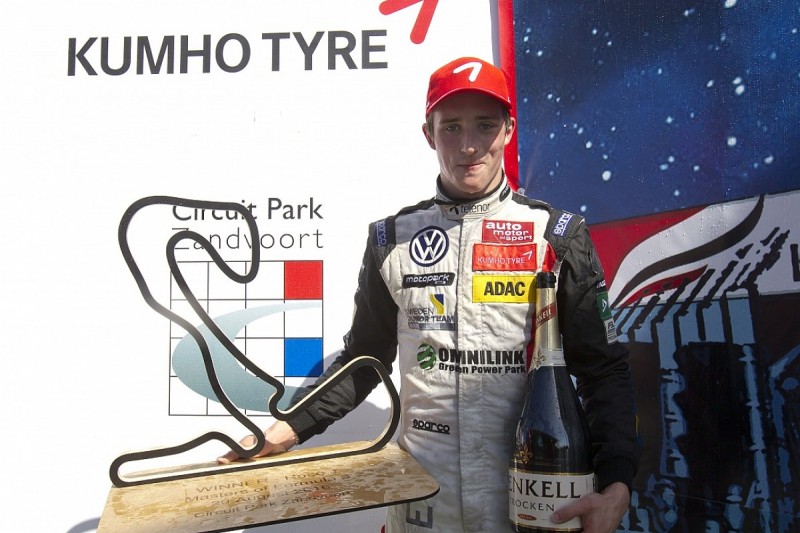 Ilott pushed hard early on in his quest to stay with Eriksson, but his Van Amersfoort Racing Dallara-Mercedes was never able to recover the ground lost on the line, struggling a little on the different Kumho rubber.

Ilott was secure in second despite a late race charge from the Red Bull-liveried Motopark car of Niko Kari, as the Finn ran out of laps before he could mount a proper challenge.

F3 returnee Alex Albon had a quiet race to fourth in his HitechGP Dallara-Mercedes, having lost out to Kari on the opening lap, but finished clear of Motopark's Sergio Sette Camara and Van Amersfoort Racing's Pedro Piquet.

Antoine Hubert's VAR Dallara-Mercedes took seventh while Alessio Lorandi was the best of the Carlin fleet in eighth spot.

David Beckmann upheld Mucke Motorsport's honour in ninth. Guan Yu Zhou was a frustrated 10th having bogged down at the start and fallen back from his fifth on the grid.