Eriksson, the F3 European Championship runner-up, was leading at the beginning of lap three when an early FCY ended as the leading runners were on the long straight to Lisboa.

Prema Powerteam-run Ferrari protege Callum Ilott slipstreamed Eriksson in a bid to take the lead and was almost past the Motopark driver when he moved across and they collided.

Ilott's right-rear wheel hit Eriksson's left-front wing, Ilott sustaining a puncture and Eriksson's wing getting bent into the left-front wheel so he was unable to turn into the following Lisboa turn.

After contact with the barriers, Eriksson had to stop on San Francisco Hill, causing a safety car.

"Callum crashed into me," said Eriksson.

"He thought he was already past me and he was not; it was his mistake and we both had to pay the price for it.

"You could see Callum was being really aggressive but I was there.

"But overall we showed we were one of the best in the field and we did everything we could.

"In the qualification race we only lost the win because we tried some things on the car, but [on Sunday] it felt really good." 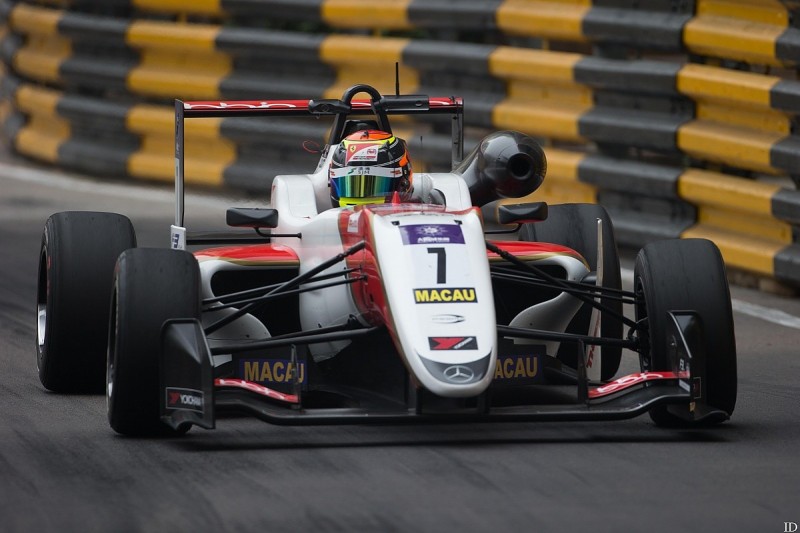 Ilott was also unimpressed with the timing of the end of the FCY.

"Because of that full-course yellow, which was 'greatly' placed, there was no radio communication down that end of the track," he told Autosport.

"So I got a better jump on him and just before braking we were very close.

"Unfortunately I touched him a tiny bit - I was on the outside moving to the inside, and if I'd waited another two metres I've have been all right.

"I got a puncture and then went straight on [into the escape road], and then I reversed out and hit the wall."

Ilott pitted under the safety car for Eriksson's car to be recovered, but retired when his tyres faded.

"I overtook six people - on the restart I passed four on the straight, but after seven laps the tyres were destroyed," he said.

"I tried to get fastest lap but there was just no grip, and even if I'd been out in front it would have been difficult [to win]."

Macau GP winner Ticktum: Only Red Bull would have taken chance on me