Macau GP winner Ticktum: Only Red Bull would have taken chance on me

Red Bull junior Daniel Ticktum has praised the energy drink's motorsport advisor Helmut Marko for having faith in him, saying rival teams would not have taken the risk he did

Ticktum, who won the Macau Grand Prix on Sunday, was signed to Red Bull's junior team at the start of 2017.

Speaking after his Macau win, he said Red Bull's conviction in his talent after his return following a ban from racing was something few else would have had the bravery to do.

"I can't thank particularly Helmut Marko enough for being able to see that spark in me," Ticktum told Autosport.

"I have to say this at this point - but I doubt other teams would have taken the risk in signing me. And I am going to make it pay off for Helmut."

Ticktum was handed a two-year ban - the second of which was suspended - after he deliberately crashed into a rival during a safety car period at an MSA Formula race at Silverstone in 2015.

He returned to competitive action last year and contested two F3 events, but his potential was enough for Red Bull to sign him up to its junior driver programme last winter. 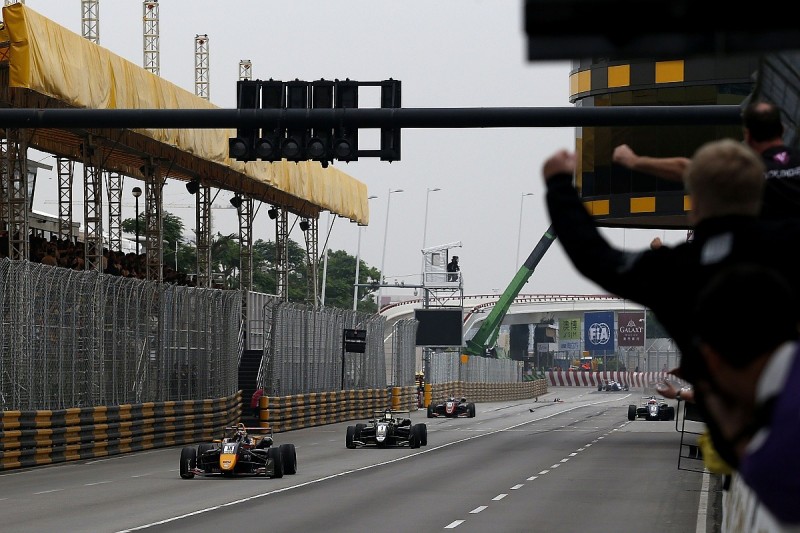 Ticktum said his triumph in Macau could be a "take off point" for his career ahead of a likely step up to F3 full time in 2018.

"It's the biggest win in my life by quite a long way," he said.

"I've had some incredible moments in karting when I was younger. I remember this sense of happiness and elation, but I haven't had it for a long time to be honest.

"It's really nice to have this feeling again.

"This is the take off point. It is going to be an incredible journey I'm sure. This is everything I ever wanted, so I put my heart and soul into it to get to this point.

"So I think I can safely say from my point of view it was a mature drive, which is something that people haven't seen before in me.

"But I have proven that I can handle a lot of situations."

Asked about the scope to progress in the junior programme at Red Bull, which currently has no obvious replacement for ousted Formula 1 driver Daniil Kvyat, Ticktum said: "I think if you are a second year driver in the Red Bull programme, then Helmut has established that you are bloody fast - unless something else has gone wrong with the team and he cannot quite gauge what the driver is doing.

"I think he knows I'm very, very fast, I'm quite confident he does.

"Now it's about showing I can put a package together, and staying calm and mature with whatever is thrown at me.

"There are a few things I'm not absolutely confident of, but what I am is I have more balls than anyone."