Red Bull junior Ticktum was on top for most of the thrice-red-flagged session, before Eriksson lowered the standard by 0.110 seconds on his final flying lap.

At the time of the second red flag, Ticktum had set a 2m12.524s, the fastest lap to date for anyone still on the same tyres on which they had started the weekend.

Ticktum and Eriksson then each fitted two left-side tyres, with Eriksson getting down to a 2m12.032s.

"The tyres were actually screwed," said Eriksson, "and with two new tyres I got three or four laps. But still I had two bad ones on the right.

"Overall the feeling was good; I'm quite confident for qualifying."

Ticktum said: "Even when I was behind [Lando] Norris I did a 2m12.1s - that was not a perfect lap and by the next lap the tyres were going.

"On old tyres we were really fast - let's just say I've got quite a lot in the bag.

"The car's nice - a few little tweaks are needed, but we're very close to where we need to be."

Ferdinand Habsburg was another late improver to move up to third in his Carlin machine, while fourth fastest was Prema Powerteam's new Ferrari protege Callum Ilott.

Ilott's lap superseded Ticktum's as the best for anyone still on their original set of tyres, and he had just completed a purple second sector when the session was red-flagged for the third and final time.

Ilott predicted that lap should have been good for first position.

Maximilian Gunther placed his Prema car fifth, with Sergio Sette Camara moving up to sixth after the Motopark mechanics worked long into the night to repair his damage from first qualifying - further problems manifested themselves at the start of the session and he joined in late.

Provisional polesitter Lando Norris was seventh for Carlin, the McLaren Formula 1 reserve running his Q1 tyres and ruining them with a massive lock-up at Police late in the session, during which he somehow avoided the barriers. 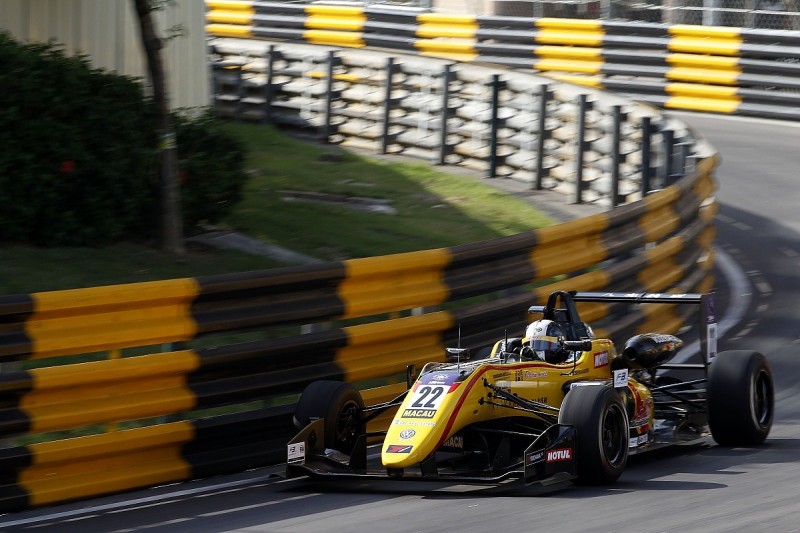 Yuhi Sekiguchi (pictured above), who was excluded from first qualifying - in which he was sixth fastest - for a multitude of scrutineering fails on his B-Max Racing car, got up to eighth, with Guan Yu Zhou and Jehan Daruvala completing the top 10.

Pedro Piquet was second fastest when he caused the first red flag - although he got his Van Amersfoort Racing car back to the pits with deranged suspension, he left debris on the circuit.

The second was triggered when Prema man Mick Schumacher locked up and shunted at Police, while the third came when Piquet's team-mate Ralf Aron hit the wall at Moorish.

Meanwhile, the field is down to 21 cars following the withdrawal of 50-year-old 'Dragon', who cracked a bone in his left hand in his Q1 shunt at San Francisco Bend.