Championship leader Dennis Hauger took his third win of the season in FIA Formula 3 at the Hungaroring, conquering a wet race to lead a Prema 1-2.

The Norwegian driver took the lead from team-mate Arthur Leclerc on lap nine, swooping past the Monegasque driver around the outside at turn three and allowing third-placed Jack Doohan to close the gap.

The field struggled with tyre wear as the circuit dried up, after two heavy downpours before the race left them to start behind the safety car, which came out twice during the 20-lap race.

Doohan finished in third for Trident, with team-mates David Schumacher and Clement Novalak finishing in fourth and fifth respectively.

Enzo Fittipaldi finished in ninth place for Charouz Racing System, having made up eight places from the start, with team-mate Logan Sargeant in tenth, the last points position.

The formation lap generated a serious amount of spray, creating poor visibility for the whole pack, and although it had paused when the cars headed out on track, it soon resumed.

The cars had a rolling start, with Leclerc keeping the lead out of Turn 1, while Jack Doohan and David Schumacher battled for third in the damp conditions.

Victor Martins was out of the race after attempting to go up the inside of Oliver Rasmussen’s HWA Racelab on lap two, but misjudging the move, running wide and hitting the wall, damaging his front wing.

The incident, which is under investigation, prompted a full safety car, although the MP Motorsport driver managed to limp back to the pits, leaving him almost a lap down upon re-entry.

The action restarted on lap four, with Smoylar and Vesti both looking to make moves through the field from sixth and seventh respectively. 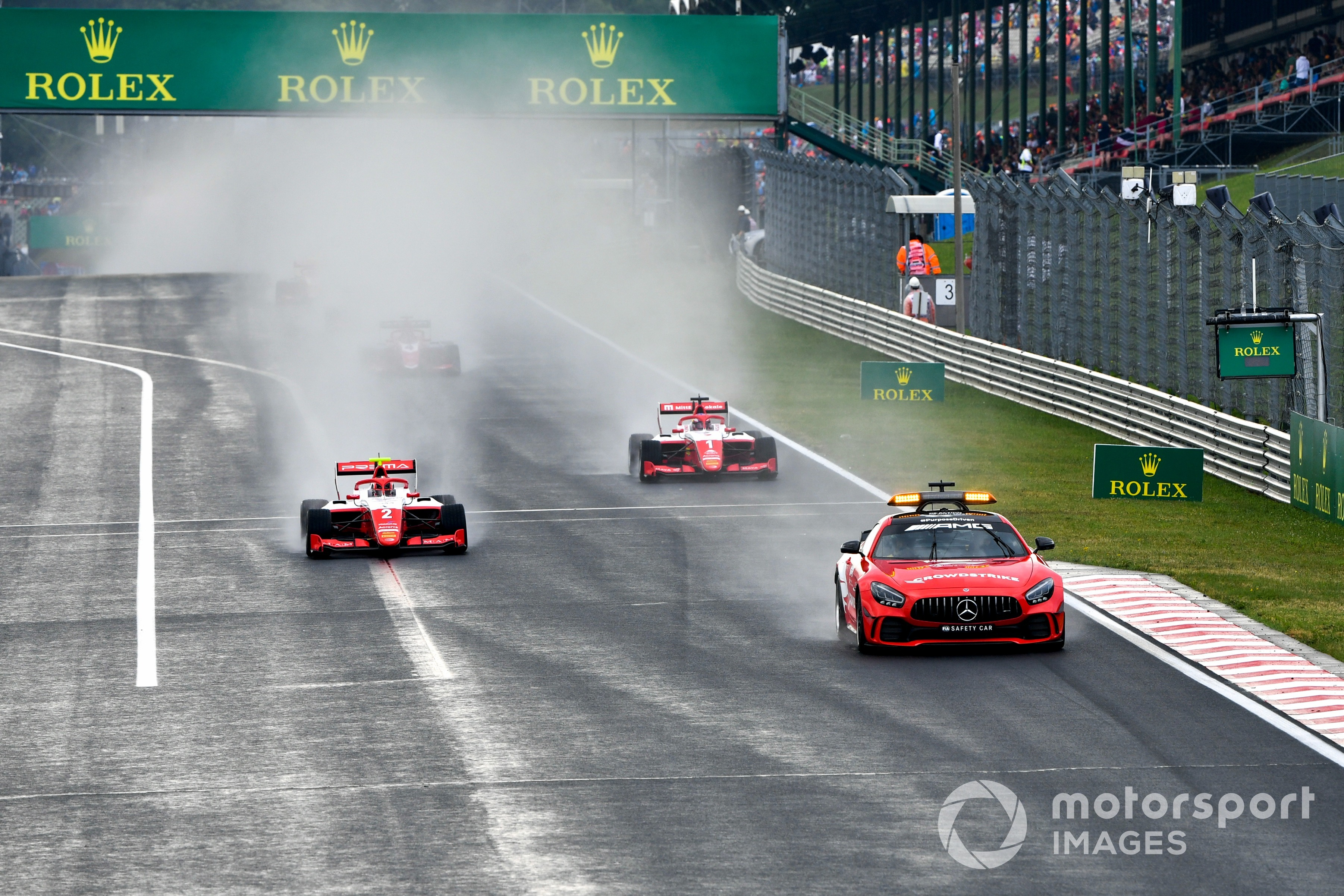 Arthur Leclerc and Dennis Hauger, both Prema Racing, behind the safety car

Olli Caldwell was lucky to only clip the rear of Vesti after a fight with Ayumu Iwasa left him going wide, demoting him to ninth.

After Leclerc went wide on lap six, briefly touching a wetter part of the track, Hauger was able to close the gap on his team-mate and forcing him into defensive driving.

By the halfway mark, the sun had created a dry line on the track, forcing the drivers to attempt to cool their wet tyres and avoid serious degradation.

By lap 12, Leclerc had recaptured the fastest lap and was catching on Hauger, running three-quarters of a second quicker than the race leader.

Matteo Nannini (HWA Racelab), who won Saturday’s second sprint race, pitted for slicks on lap 15 but suffered a slow stop after the front jack was dropped, leaving him at the back of the field.

Jonny Edgar was retired on lap 16 after suspected suspension damage for the Carlin driver.

Roman Stanek and Amaury Cordeel span off after contact, before moments later, after Ido Cohen and Villagomez (HWA Racelab) touched and span, with Laszlo Toth of Campos Racing then colliding with Cohen’s stricken Carlin car, prompting the safety car to return to the circuit - which led the field home across the line.

Hauger maintains his championship lead, with Doohan up to second place and Caldwell in third.

Formula 3 returns at Spa-Francorchamps from 27-29 August.