Matteo Nannini took his maiden win in FIA Formula 3 at the Hungaroring after a dramatic battle with Enzo Fittipaldi.

The HWA Racelab driver passed third-placed Roman Stanek (Hitech Grand Prix) off the line to move into second before finally making it past Fittipaldi (Charouz Racing System) on lap four, with the two almost making contact.

David Schumacher came sixth for Trident, with Lorenzo Colombo in seventh after losing his win from this morning’s sprint race.

Further back in the field, ART Grand Prix’s Frederik Vesti finished in 16th having started 28th, where he started after retiring from this morning’s race with a mechanical issue.

Victor Martins stalled on the grid having started in 15th leaving him at the back of the pack.

Fittipaldi got a good start but the top three went three-wide into the first corner, with Nannini overtaking Stanek to move into second, while putting huge pressure on the leader.

Behind the leading pack, Smolyar moved up to fourth, while Doohan up to fifth. 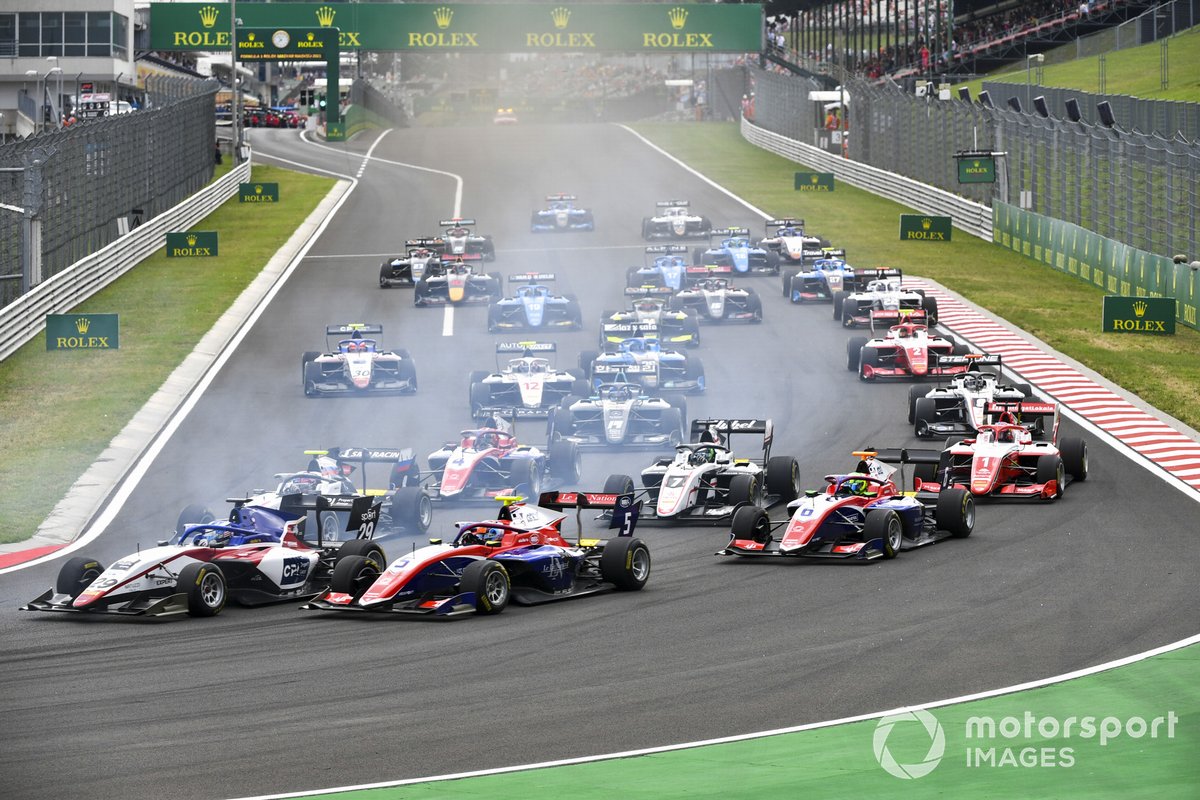 Logan Sargeant, Charouz Racing System, Clement Novalak, Trident and 6 at the start of the race

Olli Caldwell, driving for Prema, and Oliver Rasmussen of HWA Racelab tangled, plunging them to the back of the pack and forcing them both to pit with damage. The incident is being investigated by the stewards.

Amaury Cordeel (Campos Racing) and Carlin’s Ido Cohen were also forced to pit, with the former having to retire.

Nannini took the race lead on lap four, coming close to contact in the battle with Fittipaldi before locking up into Turn 2.

He had built up a 1.8 second lead from Fittipaldi by lap six, with seven-tenths between him and third-placed Stanek, before increasing his lead to 2.4 seconds by lap 10.

On lap 11, Nannini had a lap time deleted for exceeding track limits at Turn 11, as he was cautioned by his engineer over the radio that he is on his second warning for track limits.

Hauger and Schumacher battled on lap 14, with the championship leader making several attempts to pass before holding back to try again.

Schumacher passed Doohan on lap 16 in a team-mate battle, while Hauger almost snuck through amid the melee, though the Australian managed to hold him off despite locking up.

Doohan’s tyres fell off a cliff on lap 20, leaving him to be passed by five cars in as many corners, plummeting to 13th having started fourth.

Hauger made it past Schumacher into fifth on the penultimate lap, moving around the outside to improve yet another place.

Arthur Leclerc starts on pole for Prema in tomorrow’s feature race, with Hauger in second and Doohan in third.