The track was rubbering-in excessively and the later the run the better, but ART driver Hubert's penultimate lap was enough for him to take pole by less than a tenth of a second as many drivers struggled to hook-up their final lap.

His team-mate Nikita Mazepin took a brilliant second despite being crashed into by ex-Red Bull junior Niko Kari in an incident that caused an early red flag.

Kari ran wide at the fast Turn 4 on an early flying lap, and when he came back onto the track, he touched the grass with his rear right wheel, and hit Mazepin with his rear left at the outside of Turn 5.

The incident is being investigated by the stewards, and Kari broke the rear-left of his car and took no further part in the session.

Mazepin remained composed and managed to get within 0.075 seconds of pole despite having to cope with bent suspension as a result of the collision as ART realised it would not have time to replace the damaged part. 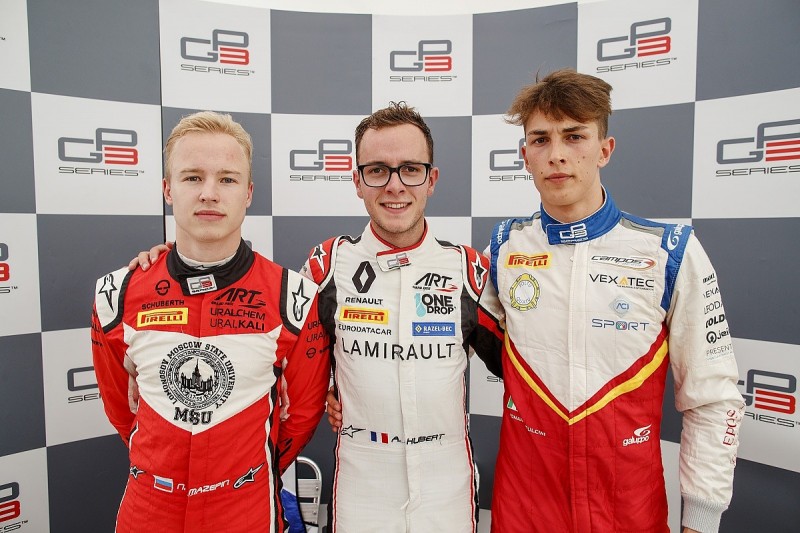 Leonardo Pulcini, one of only two non-ART polesitters this season, delivered another strong performance to take third ahead of a British ART attack of Jake Hughes and Callum Ilott.

Both drivers had struggled with their early laps but rebounded nicely on the second set of soft tyres.

Hughes survived a battle on circuit with Kari, who appeared to race him for track position on their out-laps, and a moment of his own when he ran wide at Turn 4.

American driver Ryan Tveter is in a strong run of form and topped the Trident Racing contingent in sixth ahead of new team-mate David Beckmann.

Beckmann, replacing the Formula 2-promoted Alessio Lorandi, had been fastest in practice on Friday in his first session with his new team having switched from Jenzer Motorsport.

Jannes Fitje takes his spot at the Jenzer outfit and will start 17th for his GP3 debut.

Behind Beckmann, Dorian Boccolacci was the sole MP Motorsport car for most of the session in eighth, as Devlin DeFrancesco is absent due to illness and Kari crashed out.

De Francesco expects to return after the summer break at Spa.

It was a tough session for Trident's sons-of-grand-prix-winners pairing. Giuliano Alesi (son of Jean) and Nelson Piquet's son Pedro could only manage 11th and 13th respectively.