Maximilian Gunther's third win of the season sent him top of the Formula 3 European Championship standings, after a pole-to-flag victory in the Hungaroring opener

Gunther had pulled out a useful gap on the first lap from fellow front-row starter Jake Hughes when, for the first time in Euro F3 history, the full-course-yellow was used.

This was because Ralf Aron, having just passed Norris for ninth at Turn 5, rode over the rear wheels of eighth-placed Pedro Piquet into Turn 6 and was launched into the gravel.

Piquet lost five laps having a new rear wing fitted, and the FCY stayed out for a lap before the race went green again.

Gunther had a 1.6-second lead at this stage, and Hughes eroded a couple of tenths from the Prema Powerteam driver's advantage over the next few laps.

But then the tyres on Hughes's Hitech GP car began to fade, and his attentions became focused more upon keeping third-placed Jehan Daruvala behind, leaving Gunther to speed home 5.8s to the good.

"It was a good race for us," said the German, after jumping Joel Eriksson and Lando Norris for the points lead.

"I did a good start and from then on I was controlling the race.

"On this circuit it's important to manage the tyres, especially the rears, and I concentrated on doing that, but I felt really good, it was a clean race, and most importantly I took the victory and 25 points."

Hughes completed a good defensive drive, focusing on his exit from the final corner to defend the Turn 1 passing place, and claimed his best F3 result with second.

Daruvala was given a black-and-white warning flag for exceeding track limits, and the Carlin-run Force India protege was not only challenging Hughes but defending from Joey Mawson.

Mawson, from a grid-penalised fifth, pulled off a fine manoeuvre on Callum Ilott - going round the outside at Turn 1 and putting himself on the inside line for Turn 2 - on the ninth lap of the race. 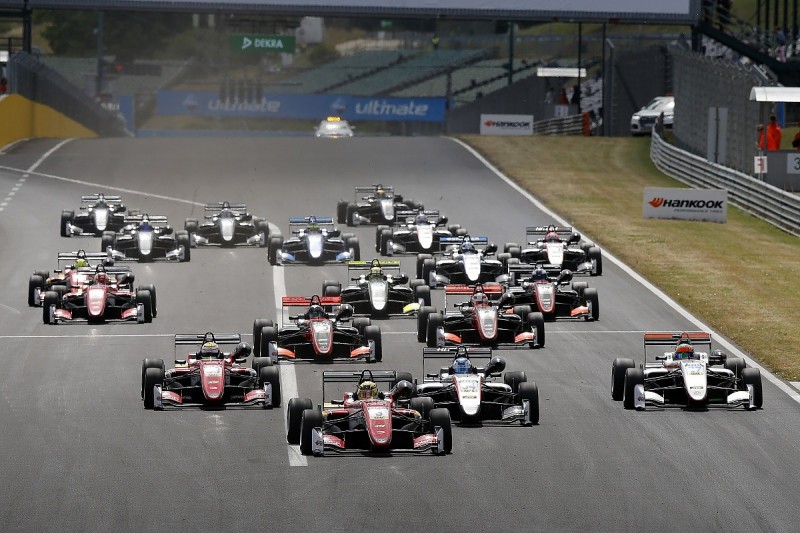 The Van Amersfoort Racing man then closed in on the duo in front, while Ilott's Prema car fell away.

Harrison Newey had a great first lap to go from ninth to sixth, but his VAR machine dropped into the clutches of Prema's Ferrari junior Guan Yu Zhou towards the end of the race.

Zhou in turn had to fend off Norris, who passed Mick Schumacher for eighth on the 10th lap, Schumacher making slight contact with the McLaren-Honda protege as he went through.

Norris then carved into a 4.2s deficit to Zhou, but the Chinese racer stayed composed to defend seventh.

Prema man Schumacher had to defend from back-of-the-grid starter Eriksson in the closing laps, after Eriksson had prised the final point away new Motopark team-mate David Beckmann with seven laps remaining.