Antonio Giovinazzi pipped Jake Dennis for pole position for the second Formula 3 European Championship race of the final round at Hockenheim, but Dennis will line up at the front for race three

Dennis looked to have done enough for a double pole in his Prema Powerteam Dallara-Mercedes, only for a last-lap effort from Carlin Dallara-Volkswagen driver Giovinazzi to edge out the Briton by a mere two thousandths of a second.

With conditions bitterly cold the peak tyre life of the Hankook rubber was extended and, as well as Giovinazzi, Prema's champion Felix Rosenqvist and Hitech GP man Alexander Sims were able to vault onto the second row for race two on the final lap.

"It was quite tough because the time was coming, coming, coming lap by lap," said Giovinazzi, who has also secured a front-row start for race three.

"Also it was difficult because I had a problem with the mirrors so I couldn't see the situation behind me [to find a clear space].

"On the second-last lap I made a little bit of a mistake in the last corner so I really focused a lot on the last one - it's good after two really hard weekends." 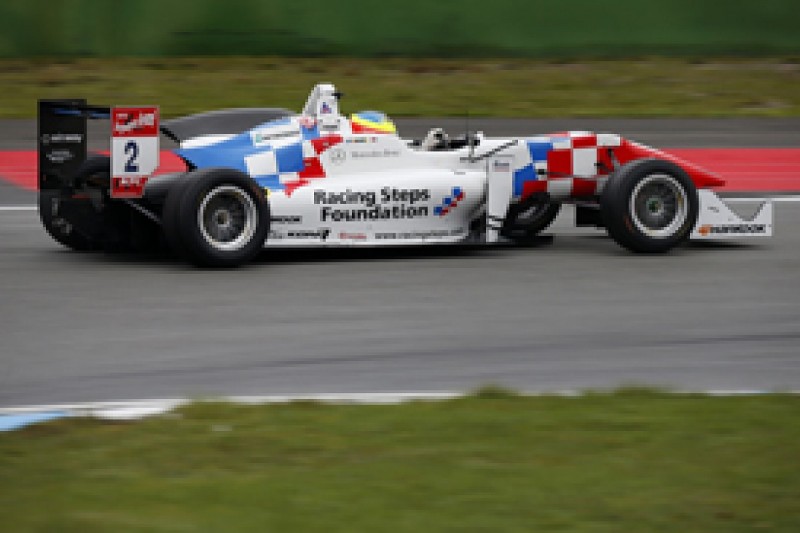 Dennis was happy to take the fastest second-best time, which decides the grid for race three, if disappointed to miss out on a double pole.

"Prema went with a strategy and it was working quite well, but Felix made a mistake on his first push lap," he said.

"Then I got into a space and that allowed me to take P1 - the car was really good; I couldn't have got much more out of it."

Rosenqvist will start third for both races, but Sims is only ninth in the line-up for race three.

Prema newboy Maximilian Gunther continued his strong return with fifth and fourth, while Alexander Albon in his Signature car is next up on both grids.

Mikkel Jensen will line up seventh for both races in his Mucke Motorsport car, while Prema's Ferrari junior Lance Stroll took an eighth and a 10th.

Markus Pommer is ninth and eighth in his Motopark machine, with Carlin's George Russell completing the top 10 for race two but planting himself in sixth on the grid for race three.

Charles Leclerc, who is fighting a battle with Giovinazzi and Dennis for the championship runner-up spot, continued his tail-end-of-the-season slide with 12th on the grid for race two, and 16th for the finale.