Formula 3 ace Ferdinand Habsburg does not regard himself as having lost the Macau Grand Prix, despite crashing out of the lead at the final corner of the race

Habsburg swept around the outside, but his line caused him to understeer into the barriers on exit, while Sette Camara spun into the wall on his tighter inside line.

That allowed Red Bull junior Dan Ticktum to win, with Habsburg crossing the line fourth with his left-front wheel askew.

"I was crying when I crashed, because I knew I'd lost it," Habsburg told Autosport, "and I was wiping my tears away.

"But I don't think you can say you've lost it when you've thrown everything into winning it at the final corner.

"The move was either win or crash - and for me it was crash."

Once Habsburg moved into second place with five laps remaining, he slashed the gap to Sette Camara as the Brazilian's rear tyres faded dramatically. 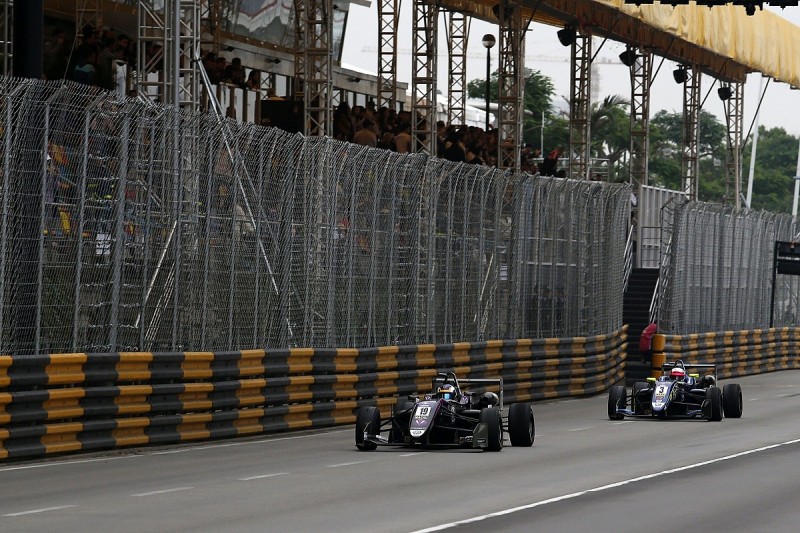 "The whole race it was do-or-die, and I had a big slide at Melco hairpin - that was a bit of a Tokyo drift for me!

"But I still had the opportunity to make the move on the last lap.

"I couldn't make a move stick on the main straight - Sergio was very aggressive but to be honest I would've done the same, so I can't complain.

"Then over the last lap I did everything I could to put him off; he defended into Fishermen's Bend and that gave me the opportunity into R Bend."

After the race, Habsburg's team-mate Lando Norris uncorked a bottle of champagne and sprayed it over a shocked Habsburg, and a Carlin mechanic hung a podium garland around his neck.

Team boss Trevor Carlin said: "Normally I think when you get to Lisboa on the final lap it's all over.

"But I had a feeling Ferdinand might say 'win or bust', and as it happened that's what it ended up being, but he so nearly pulled it off.

"We have five cars, and every one of these mechanics and engineers was there cheering for him.

"He got as big a cheer as Antonio [Felix da Costa] got last year [for winning Macau with Carlin], and for a guy who is the politest, loveliest racing driver, to have driven that feistily... Who else has driven like that? Villeneuve? Senna?