The Formula 3 European Championship is to relax its unpopular engine-change grid-penalty rule for 2017, Autosport has learned

Since the new generation of powerplants was introduced in 2014, drivers have been hit with three 10-place penalties for any engine change during the season as part of a cost-cutting drive by the FIA.

That was modified this year, so that where it could be proved that an engine failure was not the fault of the driver or team the penalty would be just one 10-place grid drop.

For next year, it will be one 10-place penalty for every engine change.

Over the past three seasons drivers and teams have complained that the three-race penalty has been too draconian.

The most-recent victim was Red Bull junior Sergio Sette Camara, who was fastest in qualifying last weekend at the Nurburgring but started from 11th on the grid as this was the second race of his trio of penalties imposed for an engine change during the previous round at Spa.

The revised rule is up for vote at the FIA World Motor Sport Council meeting in Paris on September 28, along with other F3 changes.

These include a move to revamp the race-weekend format whereby second qualifying is moved from Friday evening to Saturday afternoon, after the first race, with the second race being pushed back to Sunday morning and the third to Sunday afternoon.

This format - which will be used on a one-off basis for the next round at Imola - was standard for the series up to and including 2014, but was changed for '15.

Moving the second qualifying session to Saturday will make things easier for drivers, who currently have 80 minutes of free practice and two 20-minute qualifying periods on Fridays. 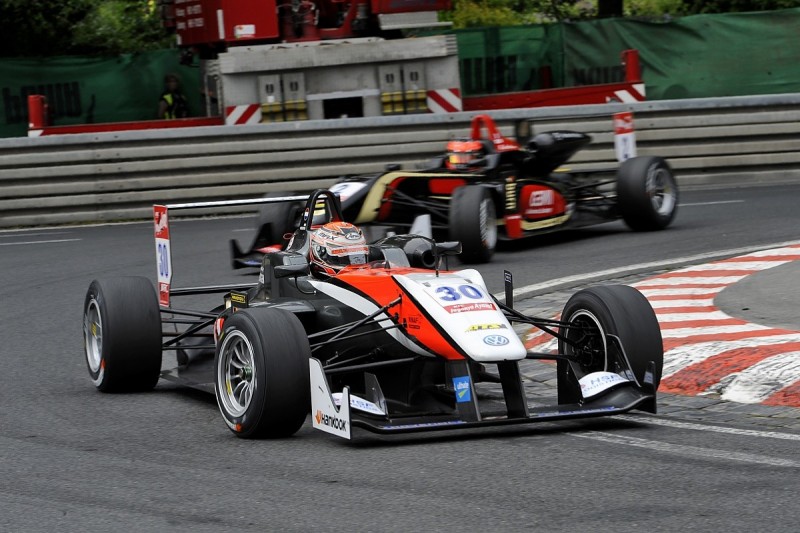 Van Amersfoort Racing boss Frits van Amersfoort said that the revival of the system would help rookies in the same way as it did Max Verstappen, who the team ran in his sensational 2014 F3 season.

"I'm quite sure that in 2014 with Max we wouldn't have won so much if we'd had everything [practice and qualifying] on one day," he told Autosport.

"For every driver, it is mentally too much because there's no time to understand what's happening and overcome it, so for everyone involved it's better to do it this way."

It is also understood that a principle of data-sharing between teams in order to peg back the advantage of the bigger established teams is being debated, although the details are yet to be decided.

Teams are optimistic that European F3 can bounce back from its low of 17 cars last time out at the Nurburgring.

"I think Wally Mertes [the series promoter] and the FIA are doing their best to make it better and I'm quite convinced it will be," added van Amersfoort.

"Thirty or more cars is out of the question, but at least a stable 24 to 26 cars should be possible."