Zane Maloney took his maiden FIA Formula 3 win in Sunday’s feature race at Spa as Ollie Bearman took his second podium in as many races.

The Trident driver, who suffered a huge crash in the sprint race, lined up second before passing Caio Collet for the lead on the first lap, but was forced to give the position back after the pair ran wide, letting Oliver Goethe into the lead in the process and dropping the Barbadian to third.

But he fought back, moving back up to second several laps later, before passing his MP Motorsport rival late in the race at Les Combes for the lead.

Roman Stanek took second, with Collet crossing the line in third but demoted to sixth by a five-second penalty for rejoining unsafely after his tussle with Maloney, handing Bearman third place after winning Saturday’s sprint race.

Both Collet and Maloney got strong starts off the line, with the Brazilian driver leading, but the pair’s Les Combes tussle on lap one handed Goethe, in just his second F3 weekend, the lead.

The safety car was deployed on lap three after Kush Maini and Francesco Pizzi made contact at the chicane, with Maini then taking out title contender Victor Martins and Ido Cohen as he attempted to get back to the pits.

Racing resumed on lap six, with Collet taking the lead from Goethe on the Kemmel straight before Maloney retook second out of Les Combes.

Stanek then took third from Goethe at the same spot the following tour, demoting the Euroformula Open championship leader to fourth. 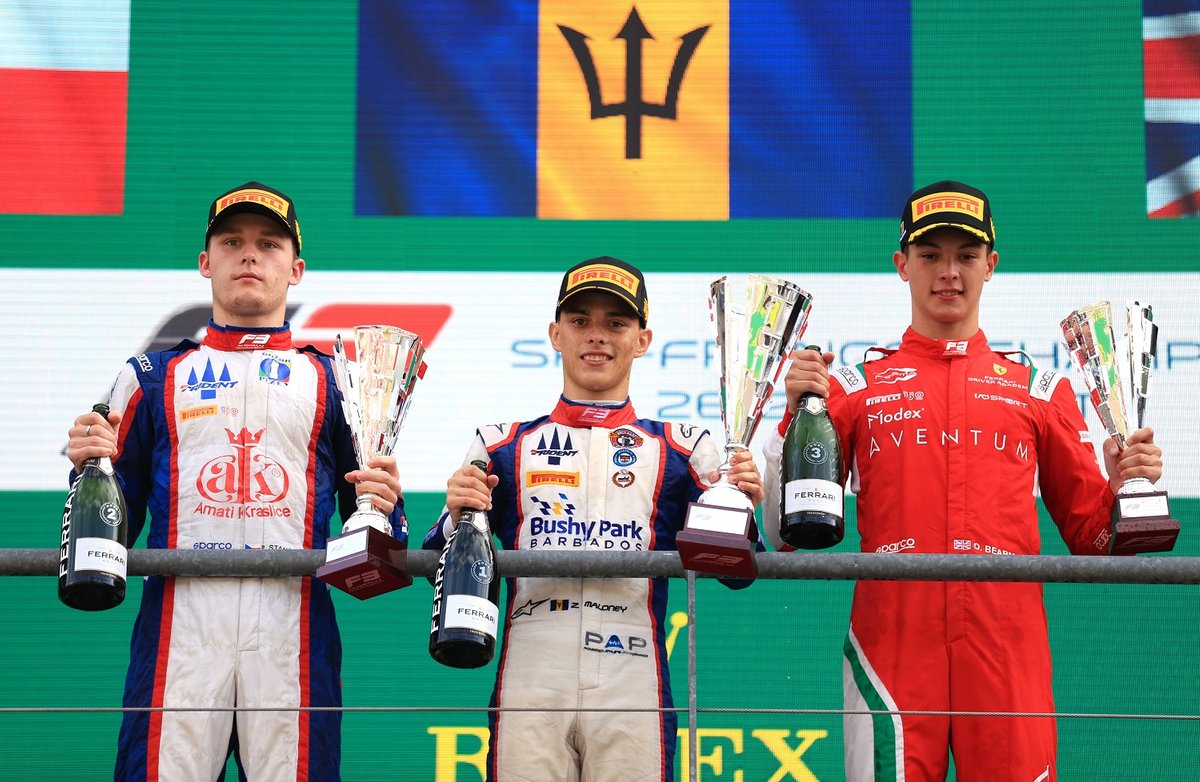 The race was neutralised for a second time after just one lap of racing, with Gregoire Saucy and Pepe Marti tangling at Turn 7 and the ART driver ending up in the wall.

Once racing resumed, Maloney snatched the lead from Collet at Les Combes, with Jonny Edgar (Trident) applying pressure to Goethe for fourth as Bearman tried to get in on the action.

Stanek took second from Collet at the end of the Kemmel straight on lap 14 as further back, Arthur Leclerc, who started in 20th, tussled with Zak O’Sullivan for 12th before going wide at Les Combes.

With just three laps remaining, Bearman took fifth up the inside of Turn 1 from Edgar before launching his attack on Goethe on the final lap, breezing past on the Kemmel straight.

The podium promotes Bearman to second in the standings, just one point behind Isack Hadjar, who finished 14th after struggling in tricky conditions in qualifying.

Bearman in turn sits one point ahead of Martins, with Leclerc another point back in the standings with two rounds remaining at Zandvoort and Monza.

Collet settled for sixth, with David Vidales in seventh having lined up 18th for Campos Racing and William Alatalo in eighth.

Alexander Smolyar and Reece Ushijima rounded off the top 10, with Leclerc finishing just outside the points in 11th.