The Ferrari Driver Academy member lined up fifth but took advantage of first lap chaos ahead of him to lead out of Raidillon.

Despite a lengthy stoppage after a horrific crash between Zane Maloney and Oliver Goethe at Blanchimont, the Briton held on at the restart to take his first series win and reignite his title hopes.

Roman Stanek secured second place for Trident after team-mate Jonny Edgar was handed a five-second penalty for contact with Franco Colapinto, with Alexander Smolyar in third for MP Motorsport.

Bearman got a good start off the line, immediately moving up to fourth, before chaos at Les Combes reshuffled the order as Colapinto was spun by Edgar.

Further ahead, polesitter O’Sullivan and Juan Manuel Correa made contact as the ART driver attempted a move for the lead, dropping both down the order, the former having suffered front wing damage while Correa had a puncture.

Brad Benavides briefly took the lead for Carlin after the melee, before Bearman snatched the lead, with Edgar running close behind in third.

Further back, the title contenders started their charge, with the top four all struggling in qualifying. Prema’s Arthur Leclerc, who lined up in 20th, was up to 13th, with Victor Martins (ART) up eight positions in 16th and Hitech’s Isack Hadjar two cars behind him, having started in 23rd. 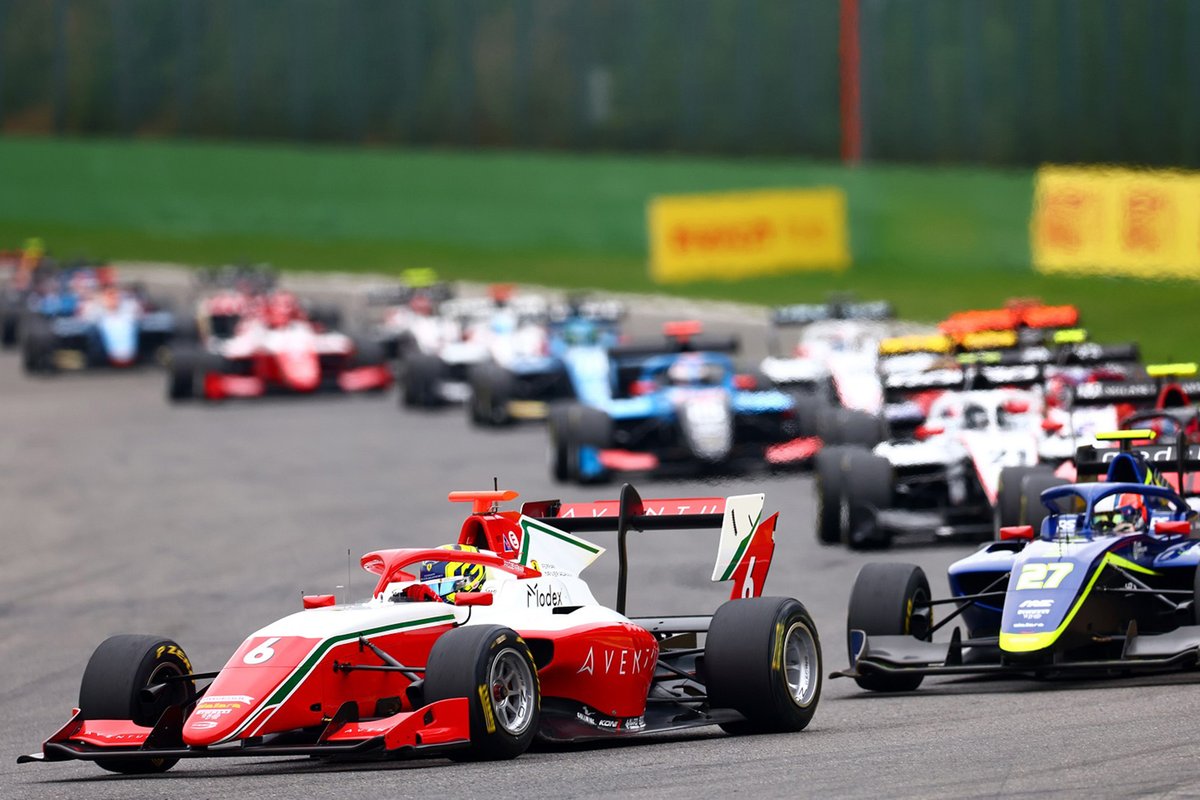 The safety car was deployed on lap two after Christian Mansell’s Charouz-run car ended up in the gravel at Les Combes courtesy of contact from Rafael Villagomez (Van Amersfoort Racing).

Edgar took second on the restart from Benavides at Les Combes, but moments later the safety car was deployed again as Maloney and Goethe made contact at Blanchimont as Maloney attempted a move down the inside. Both drivers walked away from the crash.

Racing resumed after a 30-minute stoppage for the barriers to be repaired, with Bearman holding the lead while Benavides and Edgar tussled for third.

Smolyar then took third from Benavides, with Roman Stanek taking fourth at Pouhon for Trident.

Leclerc, meanwhile, had continued his charge through the field and was embroiled in a fight for sixth with David Vidales (Campos), with team-mate Jak Crawford, who started last after a spin in qualifying, up to 11th.

The Monegasque driver secured sixth on lap 13, with Stanek snatching third from Smolyar on the Kemmel straight as Hadjar and Crawford tussled for the final points-paying position.

Leclerc eventually took fifth on the straight on the penultimate lap before Hadjar took ninth from Caio Collet on the final tour.

Despite crossing the line second, Edgar’s penalty demoted him to fourth, with Leclerc in fifth and Jenzer Motorsport’s William Alatalo in sixth despite a brief trip into the gravel.

Vidales took seventh, with Hadjar securing eighth and Collet in ninth. Crawford made up 20 places for the final point, with championship contender Martins in 22nd after taking his drivethrough penalty for a jump start.