Leading junior single-seater squad DAMS will stop racing in GP3 at the end of the 2017 season, with the MP Motorsport team taking over its entry for next year

DAMS' final race appearance in the third-tier Formula 1 support category will be at the Abu Dhabi season finale in November.

It is quitting GP3 to devote additional resources to its e.dams Formula E entry, which it runs in partnership with Renault.

"MP Motorsport is going to take over our entry and we are stopping GP3, mainly because we were too stretched between F2, GP3 and Formula E," DAMS managing director Francois Sicard told Autosport.

"[In] Formula E we are doing the racing, but we also have a development team for Renault.

"Renault is reinforcing themselves to develop in Formula E and they asked us to be stronger.

"So the idea is to be focused on only on F2 [and] Formula E and to reinforce the staff of Formula E, especially the development and the racing team."

DAMS only joined GP3 in 2016 and achieved two victories - both with Jake Hughes - on the way to finishing fourth in the teams' standings. 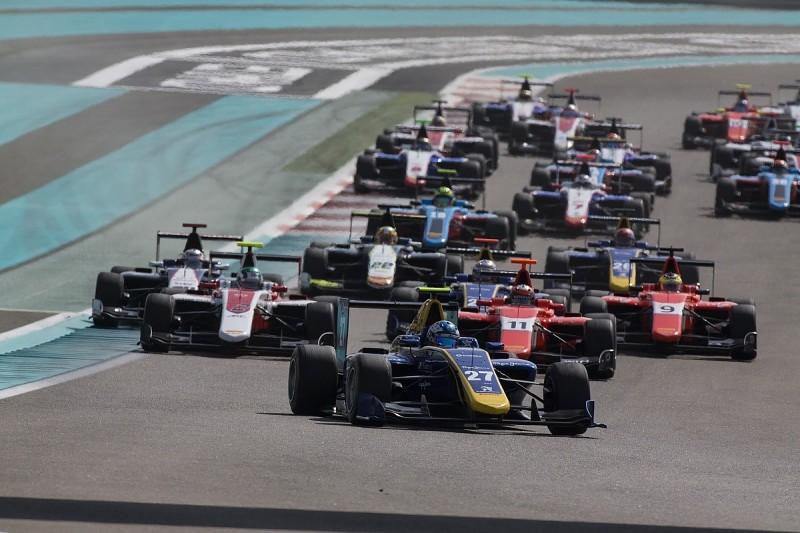 So far in 2017, DAMS is sixth and last in the teams' championship.

Sicard said it was disappointing for his team to be leaving GP3 without achieving championship success.

"In the past at DAMS we've been used to winning in every category we went to," he said.

"[In] GP3 we won races, we did podiums and poles, but we wanted to have better results in the championship so it's like there is something not totally finished.

"This is life, but we would have preferred to finish as we did in World Series by Renault - we won the last race [and] the championship twice - job done.

"Here we have the feeling that we are leaving a bit too early.

"But this is a strategic decision we had to take and we had the opportunity [that] MP was interested to jump in, so we made the deal with them."

GP3 is set to be replaced by the new single-make FIA Formula 3 International championship in 2019.

Sicard, who said "never say no" when asked if DAMS would ever return to third-tier racing, explained that the decision to introduce the new F3 formula for 2019 had come too late to convince his team to stay put.

"Maybe we would have changed our decision if the merger would have been earlier, meaning 2018," he said.

"The fact that it has been postponed didn't help the decision and [now] we have to focus on Formula E as well as F2.

"[Had] the new F3 started in 2018 maybe we would have tried, but whatever, the need to focus on F2 and Formula E is more important [and] we have taken the decision now."

DAMS will operate its GP3 cars alongside MP Motorsport in the post-season test at the Yas Marina circuit on November 30 to December 2.