Red Bull junior Ticktum finished the race second on the road but was pushed down to third - still his first GP3 podium one week after his dramatic victory in the blue riband Formula 3 race - after a five-second time penalty for leaving the track and gaining an advantage was applied.

Mercedes Formula 1 junior George Russell finished fourth in the final race of his title-winning campaign, and his team-mate Jack Aitken held on the second in the points standings despite failing to score.

At the start, Tveter lead away from pole as the frontrunners stayed in grid order - with only Russell losing out to race one winner Niko Kari as he bounced dramatically over the kerbs at the exit of the flowing Turn 3/4 high speed sequence, falling to eighth.

Tveter held the lead until DRS was activated on lap three of 14, when Boccolacci triggered the use-limited overtaking aid and blasted around the outside of the American on the approach to Turn 11 at the end of the Yas Marina track's second long straight.

With Tveter on the inside, Boccolacci had to brave it on the brakes on the outside - but he sealed the move deep in the corner, crucially keeping two wheels on the track.

From there the French driver - competing in his rookie GP3 season - was never threatened and he came home 5.5s clear. 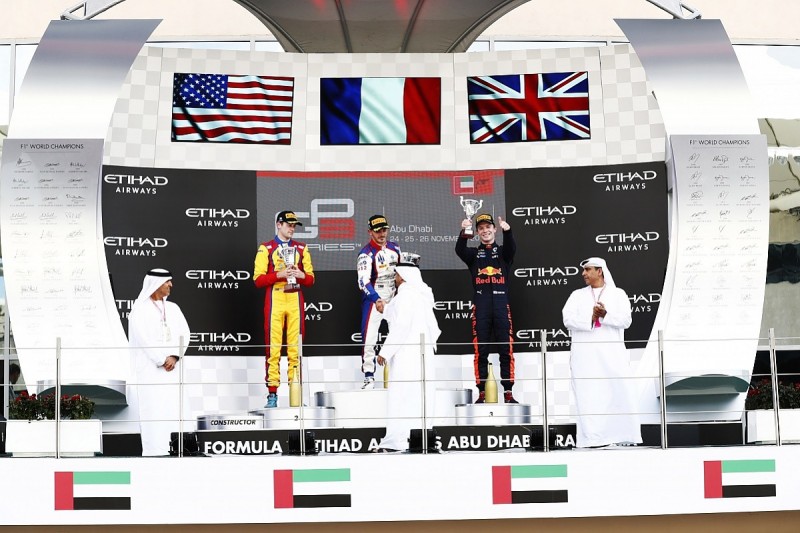 Ticktum had used a pair of daring passes on Alessio Lorandi and Steijn Schothorst on the second straight to rise to third.

In both cases he overcame their defences by squeezing his car towards the barrier on the inside of the high-speed section, but in the second move he was adjudged to have gained an advantage in doing so and was handed a penalty.

The DAMS racer had already scampered clear of Schothorst, but he attacked and passed Tveter to blast further clear in the remaining laps, holding onto his podium by 1.4s over Russell when the time was applied.

Russell had spent much of the race battling Jenzer Motorsport's Arjun Maini - eventually blasting by for good on lap 10 - and was the main beneficiary of Kari and Schothorst colliding at Turn 14 on the penultimate lap.

Anthoine Hubert finished fifth ahead of Kari, who broke his front wing in the incident with Arden team-mate Schothorst - classified a lapped 18th after pitting.

Bruno Baptista finished seventh on the road after passing Maini on the final lap, cutting Turns 11/12/13 as he did so.

Kevin Jorg was ninth ahead of Aitken, who had another quiet race to 10th, but did secure the runner-up position to Russell in the standings as their ART Grand Prix team-mate Nirei Fukuzumi finished 14th.

Honda junior Fukuzumi had charged up from 15th on the grid early on, but he fell back down the order in the closing stages.