Caldwell then staved off pressure from F3 rookie Victor Martins to comfortably better his previous best finish of fifth at the Red Bull Ring last year and win by 0.9s.

MP Motorsport driver Martins took his first podium in F3 after an audacious attempt to pass Caldwell around the outside at Turn 1 on the final lap of 22 was aborted, while ART GP’s Frederik Vesti completed the podium.

The first safety car came out on the first lap after contact between the top two in race one - runner-up Clement Novalak and race-winner Alex Smolyar - at Turn 2 resulted in the latter receiving a rear-right puncture, before veering right and collecting Charouz driver Logan Sargeant on his way into the gravel.

Racing resumed on the fourth lap, with poleman Fittipaldi maintaining his lead over Schumacher and Nannini, while further back there was a battle for fourth between Martins, Hauger and Caldwell.

The grandson of double world champion Enzo, Fittipaldi held the lead until the 12th lap when Schumacher - the son of six-times Formula 1 race winner Ralf - took him by surprise with a late braking move at Turn 1.

But just three laps later, the pair collided at the Turn 2 left-hander as Fittipaldi attempted to pass around the outside of Turn 1 before contacting the German, who bounced over the kerb and across the gravel into the barrier. 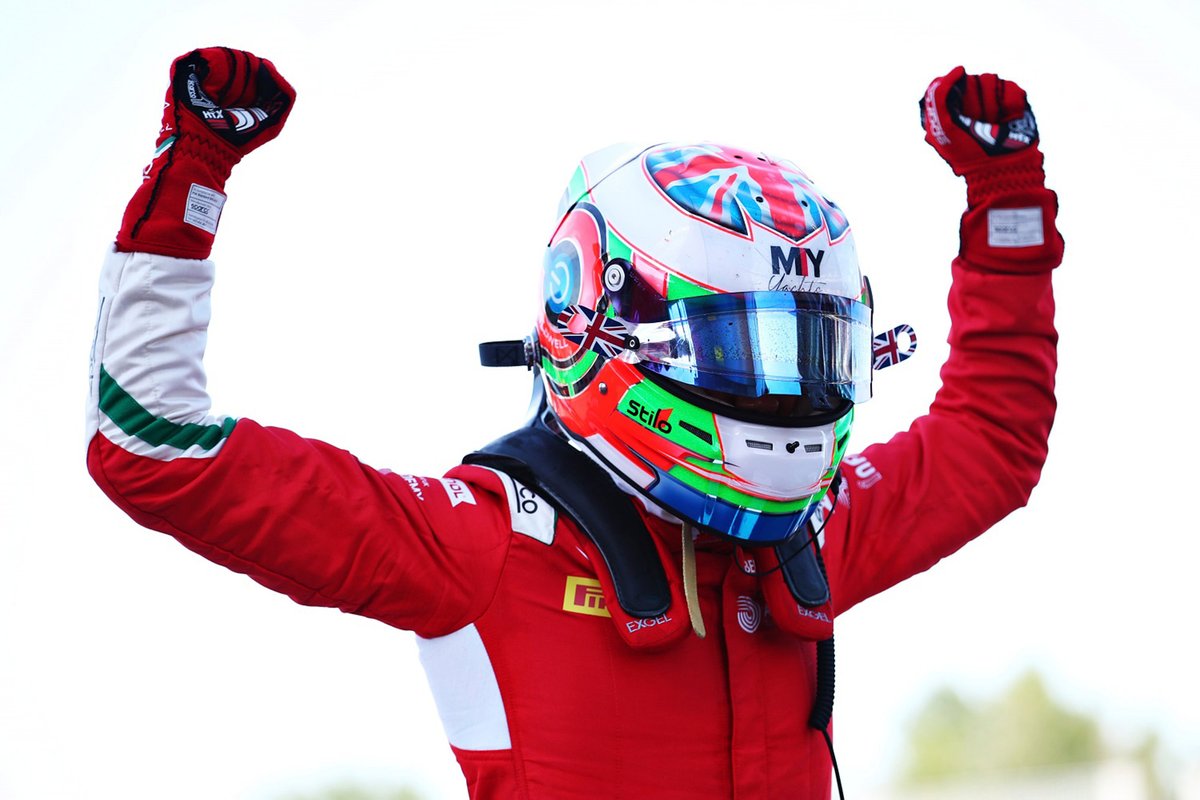 This gave Nannini the lead, with Hauger second and Fittipaldi dropping to third before the safety car was deployed for a second time.

But Fittipaldi ground to a halt behind the safety car, ending his race and promoting Hauger to second and Caldwell to third before racing resumed on lap 17.

Another tussle for the lead ensued as Nannini attempted to fend off Hauger, only for the Norwegian to get sideways over the Turn 1 kerb and punt Nannini into a spin.

Both cars lost their front wings in the tangle and plummeted down the order, allowing Caldwell to take the lead. Hauger was issued a 10 second post-race penalty for the contact, although it didn't affect his finishing position of 25th.

ART GP’s Juan Manuel Correa, returning to racing 18 months after surviving a tragic multiple car Formula 2 crash at Spa in 2019 that claimed the life of Anthoine Hubert, scored points on his second race back behind the wheel, finishing tenth.

Arthur Leclerc stormed through from 28th to 12th following a puncture in Race 1 on Saturday morning. However he was also handed a 10 second penalty for breaching regulations under safety car conditions, dropping to 24th after exceeding the minimum delta time in four consecutive marshalling sectors on lap 16.

The third race of the weekend takes place on Sunday morning, with the grid having been decided during Friday’s qualifying session.

Hauger starts on pole, with Trident’s Jack Doohan in second and Martins in third. Nannini lines up fourth, with Vesti in fifth and Caldwell sixth.