The reprofiled chicane used for Formula E testing at Valencia is the main reason why 2019 lap times are already significantly faster than the best from '18, says Jean-Eric Vergne.

The chicane is added to the main straight at the Circuit Ricardo Tormo to make the track more representative of the city-centre circuits FE races on.

FE has two chicanes on the start/finish straight when it first visited the track for pre-season testing in 2017, but this was reduced to one for last year.

But for 2019, that sequence of corners - which adds three turns to Valencia's National layout - has been tweaked, and the change means drivers can carry more speed through the sequence.

In 2018 cars were taking the chicane at 30km/h, but this has increased to 60km/h thanks to the wider arrangement.

A consequence of this is faster lap times; last year's best time - a 1m16.977s set by then BMW Andretti driver Antonio Felix da Costa - was quickly beaten on Tuesday's opening day of 2019 testing.

The rest of the circuit is unchanged from 2018, although the track being used this week has exactly the same 1.923-mile length as last year.

When asked about the time difference by Autosport, Vergne said: "It's the chicane.

"I had a look this morning and it's mainly the chicane.

"Last year was incredibly slow, and the chicane [now] feels good," he said.

Guenther agreed the new chicane was "representative" and said he was "enjoying the first corners of the lap".

"It [was] pretty tight, which on the one hand has been the character of Formula E chicanes, but this developed a bit during season five, and going into season six, and I think the change they've made is something really good," he added. 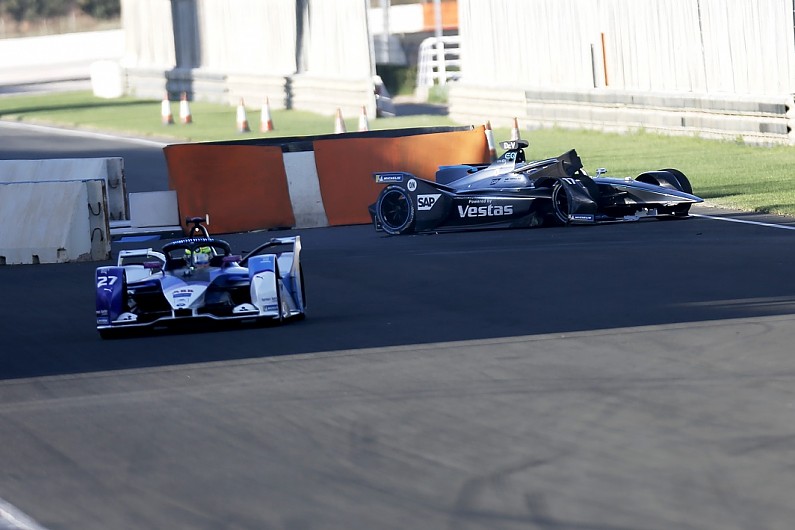 The chicane has nevertheless caused drivers issues so far in this year's test, with Jaguar's James Calado crashing there on Tuesday morning, and Mercedes driver Nyck de Vries (pictured above) and Porsche's Andre Lotterer hitting the wall early on day two.

As first reported by Autosport, FE and the FIA are working to eliminate the need for race tracks to feature tight chicanes after several high-profile accidents occurred at such corners during the 2018/19 season.

It is understood that this plan is still being developed and chicanes used in the upcoming season are likely to be wider and feature higher average speeds along the lines of the Valencia iteration.