Daniel Abt gave Audi its first Formula E win of the 2017/18 season by clinching victory in the Mexico City ePrix ahead of Oliver Turvey and Sebastien Buemi.

Abt, who was stripped of a maiden win in the second leg of the Hong Kong round, made a much faster pitstop to get ahead of Turvey in the car swaps.

The 47-lap race had three distinct phases, with polesitter Felix Rosenqvist leading the early stages before stopping on-track and handing the lead to Turvey.

At the start, Rosenqvist had led away comfortably with Turvey and Buemi following him off the line in grid order.

Rosenqvist slowly edged away from Turvey over the initial laps before building a substantial gap approaching one-third distance, with his NIO rival doing likewise to Buemi.

But at the end of lap 14, Rosenqvist ground to a halt rounding the the former Peraltada turn and dropped to the rear of the field before later retiring his Mahindra. 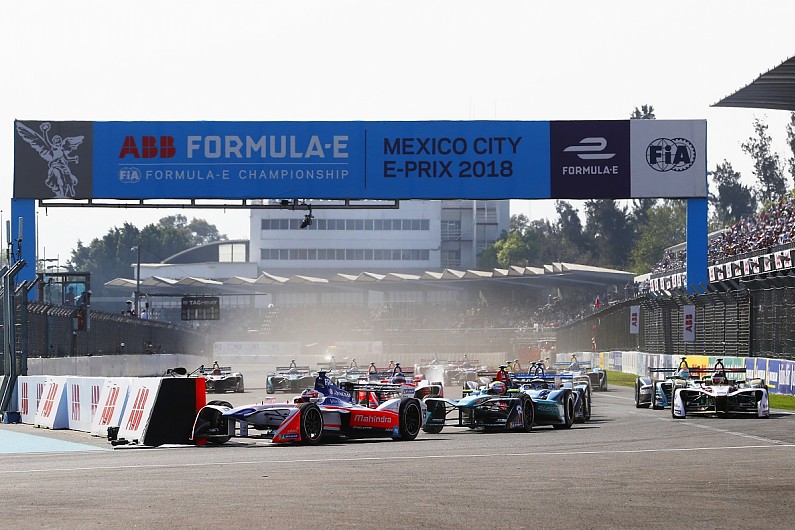 Turvey maintained his advantage over Buemi, who lost second to Abt - up from fifth on the grid - by running wide at the first corner at the start of lap 21.

The leaders came in on lap 24 and Abt made the fastest car switch to leap past Turvey and seize the net lead.

From there, Abt never looked back and surged clear over the second half of the race to take the win by 6.3 seconds.

Turvey rejoined just in front of Jean-Eric Vergne, who had used the car swaps to jump Buemi.

But Buemi quickly used his Fanboost power advantage to blast past Vergne heading into Turn 1 on lap 28.

The 2015/2016 champion then homed in on Turvey and made a dramatic attack at Turn 1 in the closing stages - both drivers locked up at the tight right-hander - but could not get by.

The driver who made the most progress in second stint was Jaguar's Nelson Piquet, who had conserved his energy in the first half and stayed out for an extra lap before pitting.

He passed his team-mate Mitch Evans and Vergne in a flurry of rapid laps and although he closed in on the Turvey-Buemi scrap he did not make a move.

Di Grassi made steady progress up the order from last on the grid in the first stint and he too ran a lap longer.

The Brazilian used his energy advantage to set the fastest lap and fight his way into the top 10 places - clashing with Jose Maria Lopez and half-spinning at Turn 1 on the way.

Alex Lynn rounded out the top 10 for Virgin Racing, with his team-mate Sam Bird 17th and last of the classified runners.

Bird had started 19th but could not match di Grassi's progress, and he collided with Nico Prost - who retired shortly afterwards - approaching the closing stages.

The other non-finisher was Nick Heidfeld, who also came to a sudden halt at the exit of the final corner in his Mahindra machine on lap 27.

Andre Lotterer had to serve a drive-through penalty after appearing to run over a mechanic's foot exiting his car swap, which dropped him from a solid-looking top 10 result and he ended up 13th.