Formula E boss Alejandro Agag does not want open chassis competition in the championship "ever".

The FIA launched the tender for the three-or-four-year supply of a new single-specification chassis for the series' fifth season last Friday.

Series CEO Agag told Autosport it was important to eventually open up competition on the battery side but insisted his preference is for Formula E to retain a common chassis.

"We don't want to open up on the chassis side ever," he said.

"The day will come [for batteries] but the chassis will stay the same.

"This is not a chassis championship, it's not about aero.

"It's electric technology, and that's what we need to focus on."

Autosport understands the partnership is keen to continue in Formula E and is likely to tender for the supply.

Renault e.dams senior manager Jean-Paul Driot, who has won a number of titles over 25 years of mono-marque competition with his DAMS team, backed Agag's stance.

"Single-make is good for everyone in terms of costs and parts," he said.

"IndyCar [where Dallara supplies all the teams] works very well, it doesn't stop the racing being exciting and very interesting."

Allowing the teams freedom on the chassis would bring aerodynamic development into play, and with it huge cost increases.

Driot's e.dams co-founder Alain Prost thinks it should remain a future option but concedes the championship is not ready for that right now.

"For me that's a second or third step," Prost said. "It could come a little bit later.

"If we reach this situation it means the discipline is going to be a big success, but it's going to cost much more money so we have to be careful.

"When you realise how much it would cost if you opened the chassis, you have to work on that, use windtunnels, and it could cost 10 or 20 times more."

Andretti Autosport co-team principal Roger Griffiths said it is not something the championship should rule out entirely but it is "not part of our short-term future".

"If we got into competitive chassis you're into F1," he added. "It's electric F1.

"We're not ready for that by a long shot and it's not the focus of the championship.

"The championship's growing and it's exciting but it needs to have long-term stability and a common chassis package for all of us is a good thing." 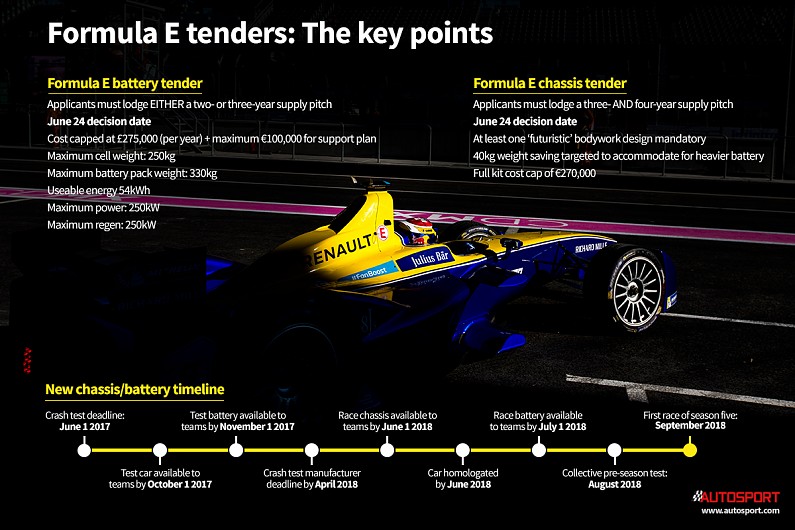