Lirim Zendeli earned his maiden FIA Formula 3 pole position after topping a qualifying session at Spa-Francorchamps that was effectively prematurely ended by a mid-session rain shower.

The session was red-flagged after just eight minutes when FIA F3 debutant Michael Belov spun his Charouz Racing System machine backwards into the barriers at Pouhon.

Only nine of the 30 drivers had posted a representative lap time at that stage, with Trident's Zendeli the fastest of them on a 2m05.393s.

When the session resumed it was Prema's Sargeant who was able to get closest to the top three with the fourth quickest time of the session, albeit six-tenths slower than Zendeli's benchmark.

The top three remained unchallenged as the cars returned to the pits to prepare for their final runs but a rain shower left little chance of improvements despite the majority of drivers attempting to set a lap in the damp conditions.

This ensured 20-year-old Zendeli, who was denied a maiden FIA F3 win at Silverstone by less than two-tenths of a second, claimed his first pole in the series.

ART GP's Pourchaire and Smolyar complete the top three on the grid, ahead of championship leader Sargeant - his worst qualifying position since the season-opener at the Red Bull Ring. 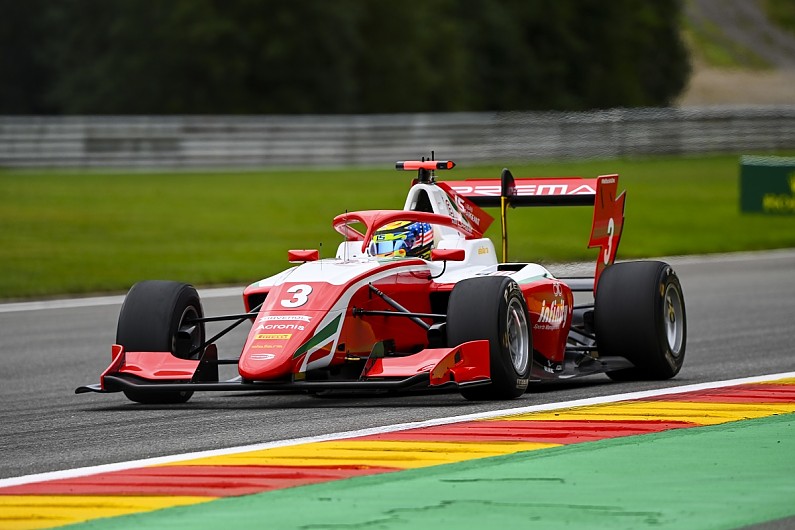 Renault junior Oscar Piastri, who sits just one point behind his Prema team-mate Sargeant in the drivers' championship, was forced to settle for eighth place ahead of the third Prema-run entry of Frederik Vesti.

Campos Racing's Alexander Peroni rounded out the top 10 fastest drivers in the session.

HWA Racelab's Jake Hughes was frustrated to only qualify in 12th place after his team-mate Jack Doohan - who qualified 13th on the grid - had topped practice on Friday morning.

"Where the hell has my pace gone?" Hughes fumed on the radio after his opening run.

David Schumacher qualified in 22nd for this first weekend with Carlin following his switch from Charouz.