Polesitter Liam Lawson - the Red Bull-backed driver being the youngest on the grid - performed admirably for MP Motorsport, in easily the best display of the season from a driver outside the top teams from the reversed-grid pole.

But after Juri Vips had taken the race one victory, his team-mate Leo Pulcini moved up to third at the start and made quick work of Trident Racing's Pedro Piquet to run behind Lawson.

He had to work incredibly hard to unseat the Kiwi driver, and it took until lap 10 of 20, but once in the lead he ran away with the win to give Hitech Grand Prix a clean sweep, a stones' throw from its head quarters, in tricky conditions on a damp track.

Lawson acted as a very impressive cork in the bottle, with the top 10 running nose to tail for most of the race.

Just after half-distance, Prema driver Robert Shwartzman - the Ferrari and SMP-backed junior leading the championship - started a barnstorming run where he jumped Christian Lundgaard for fourth, Piquet for third and finally Lawson for second with six laps remaining.

But Shwartzman's charge was too late to really challenge Pulcini,who'd moved over four seconds clear thanks to Lawson's defensive work. 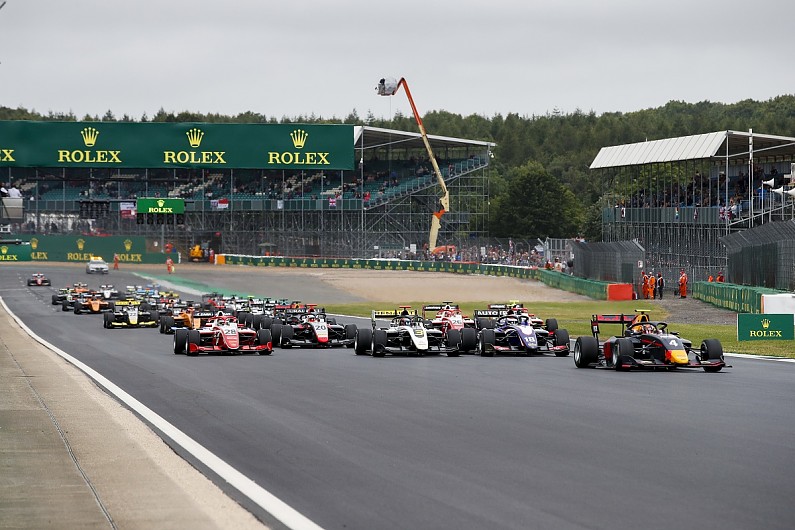 Shwartzman's fastest lap, along with trouble for Vips and team-mate Jehan Daruvala, made it a perfect day for his championship.

On the penultimate lap, Piquet went around the outside of Stowe on Lawson, but he held on at Vale.

But Daruvala clipped the rear of Piquet at Club and took both drivers' out on the second to last lap, gifting Lawson the final spot on the podium and bunching the rest of the field up.

Marcus Armstrong made a move on Lundgaard in the closing stages to take fourth ahead of the ART Grand Prix driver, with his team-mate David Beckmann moving up impressively from 11th on the grid to take sixth.

Yuki Tsunoda passed three cars at the Arena section for 15th with less than five laps to go, and made the most of the late carnage caused by Daruvala and Piquet's incident to move up to seventh for Jenzer, ahead of the Sauber Junior Team driver Fabio Scherer.

Scherer's team-mate Lirim Zendeli was furious with qualifying and started he race 15th, but the reigning German F4 champion took ninth ahead of the Brazilian Carlin driver Felipe Drugovic.

Race one winner Vips was barged off the track at Brooklands on the opening lap and was pushed off again later in the race.

Arguably the Estonian had more pace than anyone but his constant setbacks during the race meant he had to settle for 13th after a late crash with Jake Hughes.

Vips was handed a five-second penalty after the race, which demoted him to 15th in the order but means he will not face a grid drop for the next race.