Red Bull Formula 1 junior Juri Vips scored a first FIA Formula 3 victory of the season with a measured drive from third on the grid in Austria for Hitech Grand Prix.

Vips dived into the lead at Turn 3 while Max Fewtrell passed Marcus Armstrong to retake the second place he had started in from polesitter Armstrong on the fifth lap of 24.

Vips was unable to scamper clear, an excruciating 0.8-0.9s clear of ART Grand Prix's Fewtrell, just short of breaking the tow from DRS.

Ferrari junior and Prema driver Armstrong had suggested the race could be like the Indy 500, with three DRS zones to encourage overtaking, but actually after the order settled in the first few laps, the top nine remained largely the same.

Armstrong had to defend from his team-mate Jehan Daruvala with just under 10 laps to go after locking up at Turn 3 attempting a move on Fewtrell, and then Daruvala attacked at Turn 4 on the last lap but Armstrong eased his team-mate wide to secure the position to the end.

Vips took his first race win of the season with a 1.7s gap after Fewtrell came under attack on the last lap from the duelling Premas -the Italian team failing to record a win for the first time in 2019.

Piquet made a move stick with two laps to go at Turn 3, but Hughes retook the place at Turn 4 on the same lap. 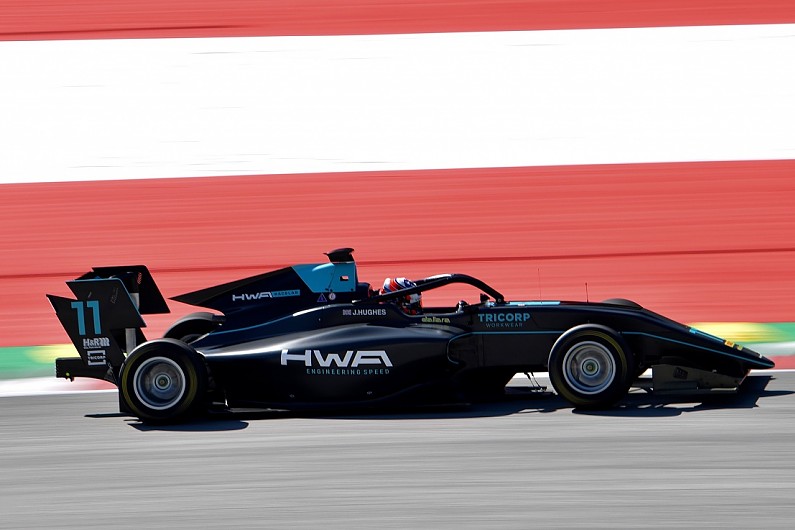 Their duel allowed points' leader Robert Shwartzman into the battle and he passed them both in the remaining laps to seal fifth after a technical issue in qualifying meant he had to start from ninth.

Piquet stole fifth from Hughes at the last, the latter seemingly struggling with a mechanical issue.

Also on the last lap, reigning German F4 champion Lirim Zendeli made up for ill health at Paul Ricard by steering his Sauber Junior Team-run car past Leo Pulcini for eighth on the last lap.

Richard Verschoor got into and then fell back out of the top 10 on numerous occasions, but sealed the position ahead of pressure from Trident's Niko Kari.

If the driving standards were poor at times in Paul Ricard last time out, it was the opposite in Austria as a small error could have seen drivers fall many places due to the proximity of the cars. Just 9.4 seconds split the top 10 at the end.