The second round of the FIA Formula 3 Championship at Paul Ricard will be contested by 29 cars as Jenzer Motorsport driver Artem Petrov is absent from the entry list.

Petrov, who was 20th in European Formula 3 last year with Van Amersfoort Racing, took a best finish of 18th during the inaugural FIA F3 weekend at Barcelona, and has also competed in Euroformula Open this season.

Andreas Jenzer, boss of his eponymous team, confirmed to Autosport that Petrov would miss this weekend's event but said the squad has a replacement for the upcoming rounds.

"I think he is with a little bit of a financial struggle at the moment," said Jenzer of Petrov.

"They tried for a long time to secure the seat.

"We had a driver ready but he didn't get his visa in time [for Paul Ricard].

"There is a replacement driver. But also I am not normally this kind of team that has three or four drivers in the pocket to replace, as it's not the aim to replace drivers, it is not so nice circumstances."

Asked if he would name the replacement, Jenzer replied: "We will wait a little bit with this. It will be another driver."

Jenzer is fielding Red Bull-backed Yuki Tsunoda and Andreas Estner this weekend, in what are just the third and fourth races since the series - effectively a merger of European F3 and the GP3 Series - was formed for 2019.

Autosport understands that one team quoted as much as £1million for a seat, but the new-for-2019 series has had no shortage of interest from drivers. 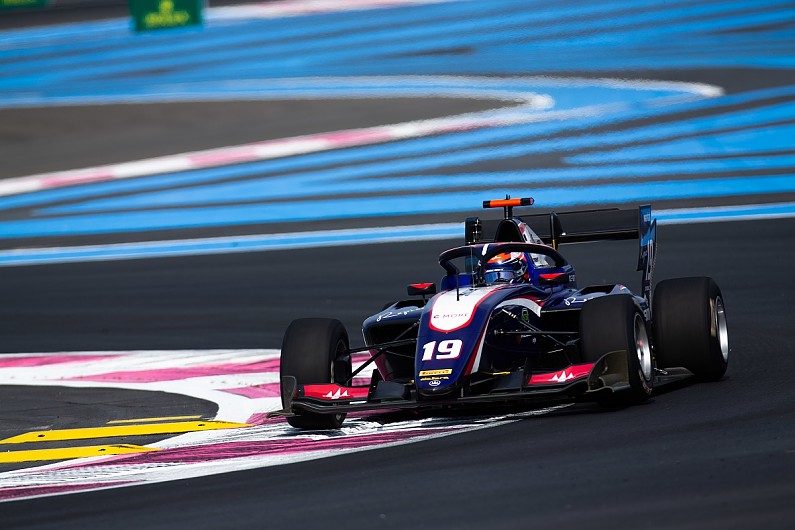 F3 was the first series on track on Friday morning, meaning early laps were spent clearing away dust and rubbering-in the circuit.

The Finn - an ex-Red Bull junior - went top in the final two minutes, as a number of late improvements in the final five minutes helped depose his team-mate Devlin DeFrancesco, who ended the session 15th.

Pre-season title favourite Pulcini had a nightmare at Barcelona - mostly as a result of an issue in qualifying - but rebounded well in practice in France and was just over a tenth off Kari's best.