Lundgaard had attacked SMP-backed Prema Racing poleman Shwartzman on the run to Turn 1 at Barcelona, making his better start pay off with a dive down the inside.

The ART Grand Prix driver scampered away to build a cushion to put himself out of DRS range, while Shwartzman had to defend robustly from his team-mate and fellow Ferrari junior Marcus Armstrong.

The top three spread out, with the only threat to Lundgaard's win a late virtual safety car for Alessio Deledda's beached Campos car at the Turn 13 right-hander approaching the chicane.

The gap between Lundgaard and Shwartzman came down to 1.4 seconds, but on the following lap Lundgaard extended his cushion and sailed to an apparently unthreatened and dominant win for the ART Grand Prix team, which had won eight out of the nine GP3 teams' titles before the series merged with European Formula 3 to form the new championship for 2019.

But as Lundgaard celebrated on the cool-down lap, he was penalised for a VSC infringement, the software being used for the first time outside of F1 and Formula 2 for this season.

Lundgaard and ART celebrated in the pits until they were cruelly informed that Shwartzman had won, ahead of Lundgaard and Armstrong. 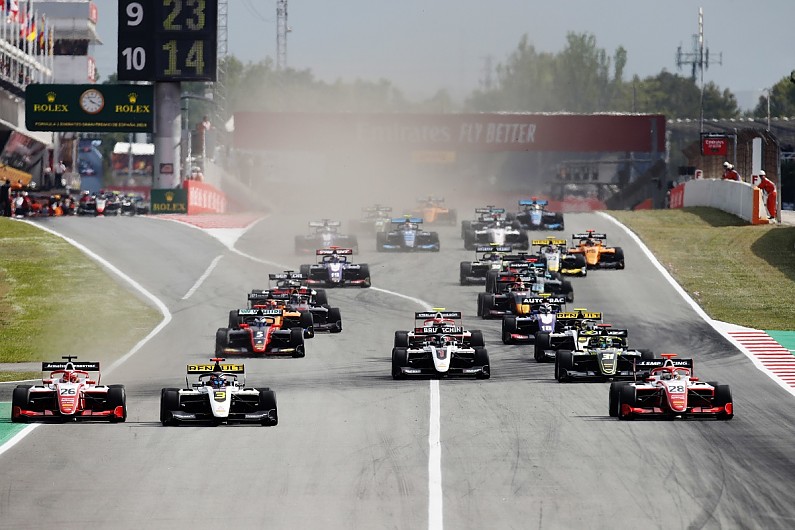 Lundgaard's ART team-mate David Beckmann made a fantastic start and reeled in Armstrong after the VSC, but couldn't get close enough to mount a move and had to settle for fourth.

Red Bull-backed Juri Vips made sure Hitech Grand Prix had something to cheer as a race-long battle with Jehan Daruvala for sixth went in his favour, second row starter Daruvala struggling to match his pace from qualifying.

Niko Kari passed fellow Finn Simo Laaksonen late on to put Trident ahead of MP Motorsport in eighth, with Yuki Tsunoda of Jenzer rounding out the top 10.

Pre-season title favourite Leo Pulcini had to start from the pits for Hitech after he couldn't engage first gear on the formation lap start, and took 20th.

Jake Hughes had no DRS in qualifying but fought back from last to 17th, while his team-mate Bent Viscaal was the highest HWA-run car in 13th in the famous team's first independent appearance in a junior single-seater race.