Chinese Ferrari junior Guan Yu Zhou says he is relieved to have walked away from the final-lap shunt that cost him fifth place in the Macau Grand Prix qualification race.

Shanghai teenager Zhou was the best of Prema Powerteam's quintet of cars in qualifying, and ran a strong race to maintain fifth position until the final lap.

Then he lost control at the Solitude Esses and crashed on the final lap, meaning he will start the Macau GP from near the back of the grid.

"I wasn't pushing so much," Zhou told Autosport.

"I think I clipped the inside wall in the right-hand corner, and then I crashed straight on [at the following left].

"It didn't seem to be anything hard, but everything was happening so quickly.

"Then when I watched what had happened [on a replay], I'm pretty happy to be standing here now."

Zhou, who is tipped to move to Formula 2 next season, is confident that he could have posed a threat in the Macau GP.

"The guys in front were fast, but we had the pace to stay close behind," he said.

"It was a big shame that happened on the last lap." 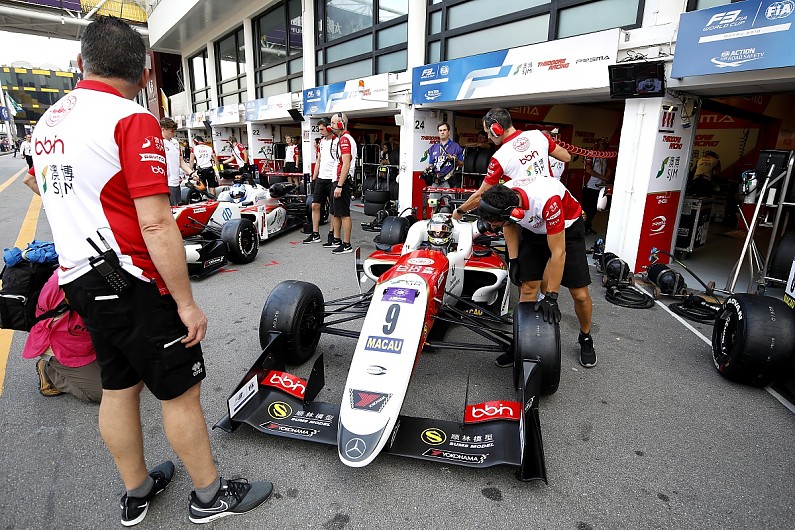 Team boss Rene Rosin said: "We are missing a bit of pace in sector one.

"All the sessions this weekend we have all been OK, and then qualifying was just unfortunate, but the pace was there.

"Now we need to look at the data."

"I was running the pace of the top guys and catching Juri [Vips] and Marcus quite a lot," said Aron.

"But as a team we are struggling to fight with Carlin and Motopark on the straights.

"We need to figure out something, although the car is really good in the mountains."