Ghiotto got a brilliant start to jump Virtuosi Racing team-mate and polesitter Guan Yu Zhou despite being on the dirty side of the grid, and kept his team-mate at arms-length until the lap six pitstops of the 29-lap encounter.

Williams junior Latifi had an almost perfect start to the race from fourth, jumping and pulling away from his McLaren-affiliated team-mate Sergio Sette Camara to run third behind the Virtuosi pair entering the pits, also on lap six.

Although Ghiotto was leading, the Virtuosi squad awarded Zhou the first pit stop, hoping to give Zhou the benefit of the undercut and Ghiotto a clear pitlane to avoid traffic.

However, DAMS managed to lever Latifi ahead of Zhou into second, and when Ghiotto pitted on lap seven, he emerged just ahead of Latifi but on cold tyres.

Latifi took the lead soon after as the Ghiotto locked-up at Brooklands after an intense fight where he defended excellently on cold tyres from the Canadian.

Latifi had even caused contact by hitting the rear of Ghiotto's car on the exit of Copse corner, such was his superior grip.

But Ghiotto wouldn't give up after being passed and made a daring dive at Stowe on lap 11, and followed that with multiple fastest laps over the coming tours to push his lead through the three-second threshold.

It was enough to give Ghiotto a third race win in F2 and a first feature race win.

Latifi matched Ghiotto with fastest laps in the closing stages, but not enough to get within range to pass.

It was still a much-needed podium to get Latifi's championship bid back on track, in a race where the points' leader Nyck de Vries was sixth.

Behind Latifi, Renault junior Zhou couldn't convert his first pole but did well to take a fourth 2019 podium, as it looked like a resurgent Sette Camara would pass him in the closing stages.

But with around five laps to go Zhou pulled away to finish ahead of the DAMS driver.

Like qualifying, Virtuosi and DAMS locked out the front four positions.

As in the closing stages of the Austria feature race, Nyck de Vries struggled for performance late on and lost the fifth place he had held for a long period to Jack Aitken. 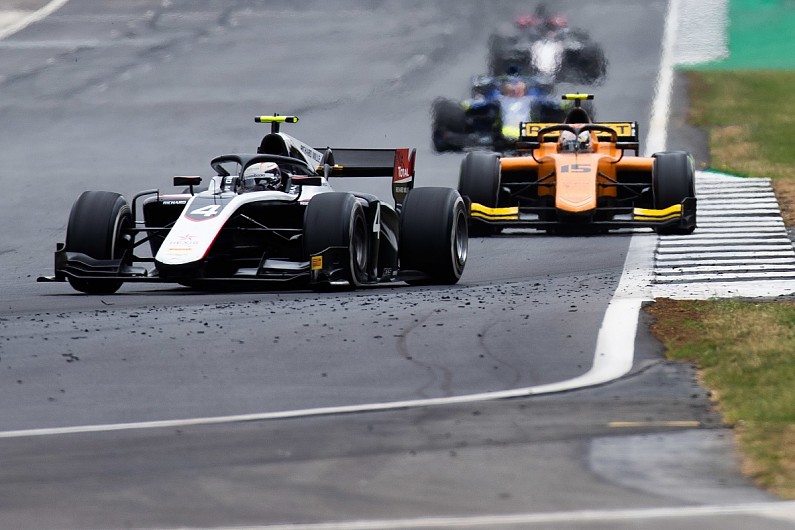 The British-Korean driver passed de Vries at Village with less than four laps to go, sealing fifth for Campos Racing.

The Carlin drivers had looked racey but both dropped positions in the pit stop phase. Fifth-place starter Louis Deletraz was the best finisher in seventh behind de Vries, while Austria feature race winner Nobuharu Matsushita had to settle for ninth.

Splitting the two was Callum Ilott in eight, taking the reverse-grid pole for Sunday's sprint race. The Sauber Junior Team driver had a slow start and did well to recover.

Behind Matsushita, Jordan King rounded out the top 10 for MP Motorsport.

Sean Gelael did not start the race citing "personal reasons" meaning only 19 cars started the race.

The only driver change for this round came for Trident Racing and Dorian Boccolacci, who retired early on with damage to his car.