Luca Ghiotto - driving for the Virtuosi Racing squad that has taken over Russian Time's entry - had qualified on pole, but struggled to get away on the formation lap, reporting "the clutch is not working at all".

Issues on race starts were common last year due to a tricky starting procedure and, although drivers reported in pre-season testing it had improved for 2019, on the start proper Ghiotto had heavy wheelspin and dropped to sixth.

Carlin's Louis Deletraz set the early running, but DAMS driver Latifi saved his tyres and, as Deletraz began to struggle, the Canadian breezed past to lead on lap nine of 32.

Latifii held the lead until his pitstop on lap 17, but an issue with one of the team's wheelguns cost him around four seconds in the stop and he seemingly emerged out of contention in fourth.

But, in a spectacular display, Latifi worked his way forward, passing the top trio over three laps to lead by lap 23.

Nyck de Vries was able to climb up the order with an undercut strategy having run third early on, but was caught late on by a number of drivers including Ghiotto, who would likely have dominated the race had he been able to hold the lead from pole.

Ghiotto passed de Vries, but could not catch Latifi and had to settle for second.

DAMS's Sergio Sette Camara secured the final podium spot with an overtake of his own on de Vries on lap 27.

The McLaren junior said "my engine is a piece of s**t" on the radio and dropped to 12th after wheelspin at the start, but raced patiently onto the podium.

Reigning GP3 champion Anthoine Hubert pulled off an incredible debut in the series for an Arden team that struggled in pre-season testing to take fourth.

After qualifying 11th, Hubert ran in the top seven for most of the race and jumped Nobuharu Matsushita and Deletraz at Turn 1 in the closing stages, before closing down de Vries to steal fourth.

Deletraz took fifth ahead of de Vries, while fifth-place starter and Renault junior Jack Aitken scored seventh on his first race for Campos Racing after switching from ART. 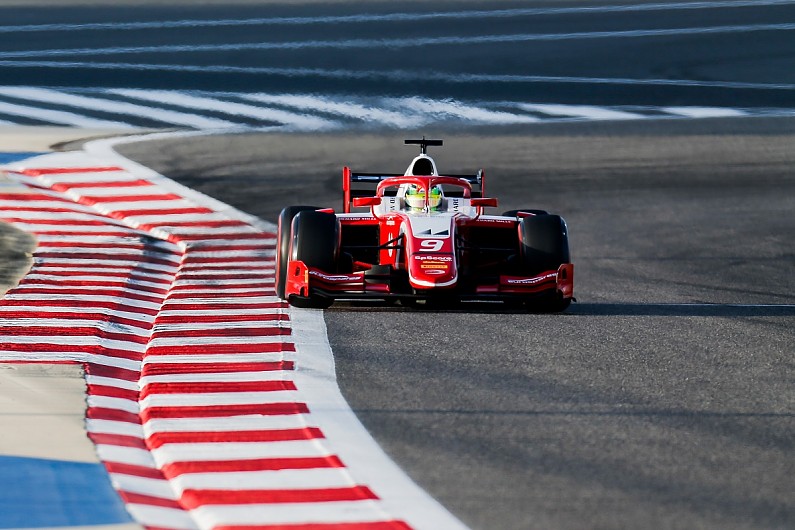 Ferrari junior Schumacher - the son of seven-time Formula 1 world champion Michael and the reigning European Formula 3 champion - clawed back almost two seconds to catch and pass Matsushita on the final lap to seal the sprint-race pole position for Prema.

Matsushita did hold on for ninth ahead of Renault junior and Virtuosi driver Guan Yu Zhou.